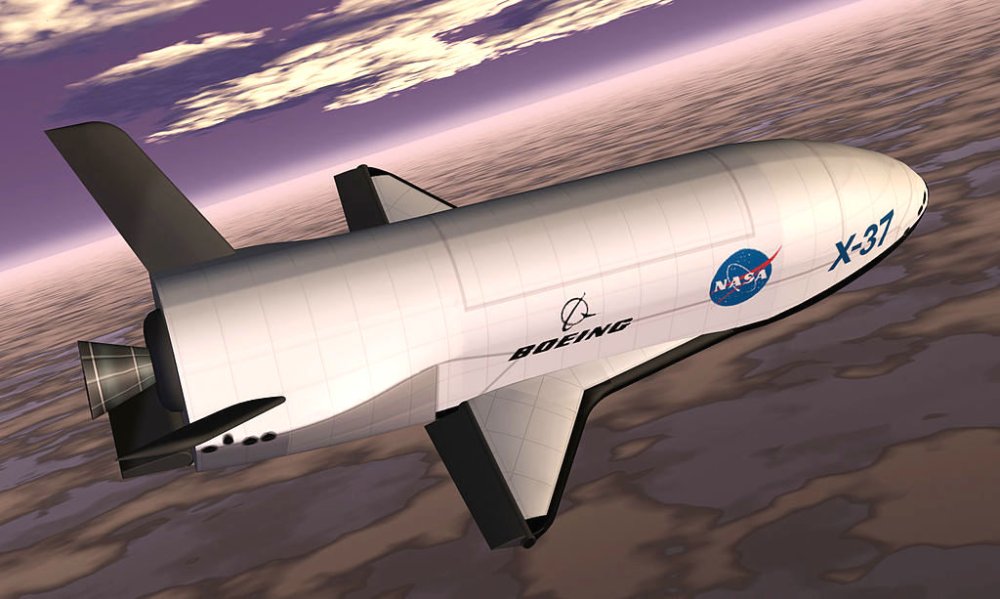 A mysterious space plane has spent more than 670 days above Earth, hurtling along an orbital path that includes some of the world’s most volatile hotspots. Known the X-37B, the U.S. Air Force’s unmanned mini-shuttle whizzes along an average of two hundred miles above the surface of the Earth. Exactly what it’s doing up there is bit of a mystery.

The space plane that would eventually become the X-37B was originally conceived of by NASA in 1999. The Space Shuttle program had failed to bring down the per-pound cost of ferrying a payload to orbit, but a smaller, unmanned aircraft using newer technologies might prove more economical. Boeing’s Phantom Works division was given a four-year contract to develop the X-37 in conjunction with NASA, followed up in 2002 with a new agreement to develop an Approach and Landing Test Vehicle to test horizontal landing concepts. Once successful, that would be followed up with an actual Orbital Test Vehicle, a launch into space, and a Space Shuttle–like landing.

In 2004 NASA transferred the X-37 program to the Defense Advanced Research Projects Agency, known as DARPA. The ALTV vehicle successfully tested out atmospheric flight concepts, but NASA’s OTV space plane was never built. Instead, the U.S. Air Force built its own OTV space plane along the same lines. In fact, it built at least two.

The X-37 is lifted into space by a United Launch Alliance Atlas V rocket using Russian-supplied RD-180 liquid-fuel rocket boosters. It sits at the top of the rocket, encased in an aerodynamic payload fairing. The X-37 is twenty-nine feet, three inches long, with a wingspan of fourteen feet, eleven inches; it weighs five tons at launch. Its payload bay is seven feet long by seven feet wide—about the same as a pickup truck. In orbit, the space plane is powered by gallium arsenide solar cells with lithium-ion batteries.

The first space plane flight, OTV-1, launched from Cape Canaveral on April 22, 2010 on an Atlas V named AV-012. The web site NASA Spaceflight speculated that the spacecraft was carrying a payload of “technology demonstration and development experiments” for the Air Force’s Rapid Capabilities Office. OTV-1 would spend 224 days in space.

What are the X-37s doing up there? There have been all sorts of theories. One theory was that the X-37 has been sidling up to the military satellites of potential adversaries such as China and Russia, examining them and even returning to American soil with them safely tucked into the payload bay. While this Blofeld-style act of orbital grand theft fires the imagination, the truth is that the X-37’s orbit is fairly easy to track and such a heist would take place literally in front of the entire planet.

Other theories are that the X-37 is a form of nuclear space bomber, loaded with nuclear bombs or even “Rods from God”—kinetic energy projectiles dropped from space that accelerate to hypersonic speeds, obliterating their targets on Earth. Parked in orbit for months at a time, the X-37 could provide a quick means of delivering devastation, faster than ICBM and more difficult to detect.

The last “sexy” theory is that the space plane is basically a spy satellite with the ability to return to Earth and have its optical sensors periodically upgraded. The X-37 has orbited over some interesting locations, including North Korea, China, ISIS-held territory and Iran. U.S. optical spy satellites are, however, quite large—the size of a school bus—and the X-37’s payload bay is far too small.

The most likely purpose for the X-37B is simply to do space research. The payloads of earlier missions remain unknown. According to the Air Force, OTV-4 is testing Hall thruster electric propulsion systems, the same systems used on the Pentagon’s Advanced Extremely High Frequency communications satellite. Hall thrusters use a magnetic field to accelerate the ions in a propellant, producing thrust. Hall thrusters are used to adjust the orbits of satellites and are a “serious candidate” to power ships to Mars. OTV-4 is also carrying one hundred NASA-supplied materials to see how they hold up to the rigors of long-term space travel. Could it be up to even more things? It’s possible, but they’d have to be physically small.

While it may not be doing any satellite snatching, the X-37B program provides the Air Force with a flying, returnable test bed for testing new technologies, a capability no other country has at this point. Even if it isn’t carrying out any cloak-and-dagger missions, it’s still performing a valuable service that will advance American space technology.