These Upgrades Will Keep U.S. Marine Ospreys Fighting for Decades 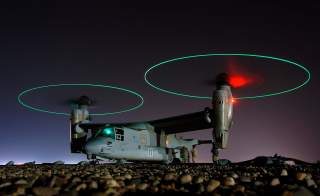 The Naval Surface Warfare Center, Dahlgren, has been exploring the use of forward firing rockets, missiles, fixed guns, a chin mounted gun, and also looked at the use of a 30MM gun along with gravity drop rockets and guided bombs deployed from the back of the V-22.

In recent years, the Corps has been working on a study to help define the requirements and ultimately inform a Marine Corps decision with regards to armament of the MV-22B Osprey.

The initial steps in the process will include arming the V-22 are to select a Targeting-FLIR, improve Digital Interoperability and designate Integrated Aircraft Survivability Equipment solutions. Integration of new weapons could begin as early as 2019 if the initiatives stay on track and are funded, Corps officials said.

Developers added that "assault support" will remain as the primary mission of the MV-22 Osprey, regardless of the weapons solution selected.

So far, Osprey maker Bell-Boeing has delivered at least 290 MV-22s out of a planned 360 program of record.

A Corps spokesman told Scout Warrior that, since 2007, the MV-22 has continuously deployed in a wide range of extreme conditions, from the deserts of Iraq and Libya to the mountains of Afghanistan and Nepal, as well as aboard amphibious shipping.

Requirements include an ability to operate in what is called “high-hot” conditions, meaning 95-degrees Fahrenheit and altitudes of 6,000 feet where helicopters typically have difficulty operating. In high-hot conditions, thinner air and lower air-pressure make helicopter maneuverability and operations more challenging.

These include a technology called V-22 Aerial Refueling System, or VARS, to be ready by 2018, Corps developers explained.

The Marine Corps Osprey with VARS will be able to refuel the F-35B Lightning II with about 4,000 pounds of fuel at VARS' initial operating capability and the MV-22B VARS capacity will increase to 10,000 pounds of fuel by 2019, Corps officials told Scout Warrior last year.

The development is designed to enhance the F-35B's range, as well as the aircraft's ability to remain on target for a longer period.

The aerial refueling technology on the Osprey will refuel helicopters at 110 knots and fixed-wing aircraft at 220 knots, Corps developers explained.

The VARS technology will also be able to refuel other aircraft such as the CH-53E/K, F-18, AV-8B Harrier jet and other V-22s.

The Corps has also been developing technology to better network Osprey aircraft through an effort called “Digital Interoperability,” or DI. This networks Osprey crews such that Marines riding in the back can have access to relevant tactical and strategic information while in route to a destination.