Things Are Not That Bad in Afghanistan 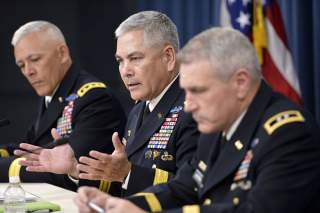 On August 4 at the Brookings Institution, General John Campbell, commander of Operation Resolute Support in Afghanistan, along with his political advisor Matthew Sherman, gave an extremely informative and moderately encouraging report from the field. There was no sense of happy talk or imminent victory, even with recent reports of the 2013 death of Mullah Omar and ensuing dissension within Taliban. Indeed, I came away from the conversation (which I moderated) even more persuaded that the United States as well as other NATO states should keep a modest level of military force in the country past 2016 to help in the fight and advance our own counterterrorism goals—even though the Obama administration's current schedule would have us withdraw all operational military forces by the end of next year.

But on a day when the mainstream media emphasized a new UN report documenting record-high casualties within Afghanistan, the Campbell message deserves more attention. We do not get a lot of direct information from the field in Afghanistan any longer, since American forces have been reduced 90 percent since the mission's peak and many reporting tasks turned over to the Afghan government. As such, the information in this kind of a relatively rare public session deserves study. Most of it is substantially more hopeful that current conventional wisdom about the conflict would suggest.

First, it is worth noting that the UN reports on casualties, while troubling, need interpretation to be understood correctly. Afghanistan is on a pace to record some 10,000 civilian casualties this year, perhaps 3,000 to 4,000 of them deaths. Actual figures are surely somewhat higher, since remote parts of the country are harder to study. But let's say civilian deaths, in this country of 30 million, will total 5,000 or so. That is a high figure but hardly astronomical by the standards of violent societies (even some considered to be "at peace"). As one point of reference, these figures compare relatively well with the situation in Colombia, widely and rightly considered a success story in counterinsurgency, which still suffers 15,000 violent deaths a year in a population just under 50 million. Statistically, it is less than twice the U.S. murder rate—too high to be sure, but a far cry from what Afghanistan suffered in the 1980s and 1990s or what several war zones in the Middle East endure today.

The above points are my own. But General Campbell noted that in his estimation, some 90 percent of those civilian casualties are inflicted by the Taliban. This is little solace to the victims, yet it is a reminder of who is instigating the fighting and killing.

Some highlights from the discussion included the following additional key facts:

—Only one American serviceman has been killed in Afghanistan this year; one Department of Defense civilian and three contractors have also given their lives. The losses are tragic, but this is obviously a huge improvement from the years when we were losing some 500 Americans annually in the war there.

—For their part, Afghan forces are suffering higher-than-ever casualties this year, on a pace to exceed 5,000 KIA. This is a very high price, to be sure, and major efforts are being taken to reduce it (e.g., teaching soldiers to carry tourniquets with them at all times, to wear body armor and helmets even when not in direct firefights, to get off checkpoints and patrol more, so as to present fewer soft and predictable targets to the enemy, to speed up evacuation of wounded soldiers from the battlefield through smarter use of their limited fleet of aircraft).

—But the above figures are also partially the result of offensive action—Afghan army units have planned and conducted several multi-corps operations this year involving several thousand soldiers or more, and Afghanistan's army and police are presently doing perhaps 98 percent of the total fighting by coalition forces

—As a result, while statistics are soft, this year Afghan forces may have inflicted three to four times the casualties on Taliban forces that it achieved last year

—The country's main cities and its major highways, notably the ring road, are still in reasonably good shape and generally safe for civilian use, with little if any deterioration in security this year (even as NATO forces have declined 90 percent since 2011 and about 65 percent since early 2014)

—The Taliban have stoked trouble in some regions where they had not previously had much presence, including Badakhsan province in the northeast, and the area around the important northern city of Kunduz. But even where they have seized district centers (of which there are about 400 in the country), Afghan forces have generally retaken the districts within a day or two

—Afghan army forces continue to suffer high rates of desertion/AWOL, making it hard to keep their fighting strength near authorized levels (total army and police strength is supposed to total 350,000 personnel, but is closer to 330,000 at present). But initiatives are being undertaken to address this challenge, including the use of retention bonuses for reenlisting soldiers, and a move towards year-round recruiting for the army (rather than typical past practice to recruit only during the winter)

—In past years, the United States and NATO were sometimes slow to help Afghans build their air force, and also to help create mid-level management and senior non-commissioned officer capacities in various logistics units; those are examples of why we still have work to do with them that may or may not be fully achievable in the next 17 months.

—Pakistan's role in the broader conflict remains complex, but it has gone on the offensive in tribal areas much more over the last year, partly in response to the late 2014 Peshawar school bombing by extremist forces. In the short term, this has pushed some violence over the border into Afghanistan; over the longer term, if it continues, it may bode more promisingly for cooperation in the broader struggle against extremism between Islamabad and Kabul.

Add it all up and the Afghanistan conflict may not be a war that is clearly being won. But it quite clearly is NOT being lost. The Afghan government and security forces are being severely tested this year, doing most of the fighting without NATO help while a new government in Kabul still gets its sea legs. So far, much to the likely chagrin of the Taliban, the Afghan government and security forces are passing the test.