Think ISIS Militants Are Scary? Wait Until Their Kids Grow Up. 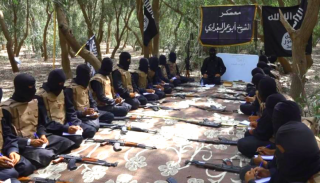 The Islamic State takes pride in training children to become jihadists, suicide bombers and beheaders. While morally despicable, this is not a discussion about the ethics of training children to be soldiers. As a country already invested in a fight against the Islamic State, however, there are some very real concerns about these children that should be addressed when using airstrikes—and potentially ground troops in the future—to “degrade and ultimately destroy [ISIS].”

Obviously, the United States should be concerned about the safety of these children—many of whom have been orphaned in either Iraq or Syria, due to both internal conflicts and, ironically, the merciless acts of the “Caliphate” to which they pledge allegiance. But as the eerie five-part series on Vice News about the Islamic State documents, these children may grow up to be the new faces of ISIS.

In the second segment of the series, several children are interviewed either by the Vice reporter or an Islamic State fighter. A father who emigrated with his son from Belgium to the Islamic State in Raqqa asks his son why he wants to kill all the infidels (namely, in Europe). His son replies, “Because they kill Muslims.” Now, place yourself in the mind of this child. Your father drills into you that all non-Muslims are infidels who want to kill Muslims. He does not explain to you that the “infidels” are only aiming to kill bad Muslims like himself. He leaves that information out. So you grow up thinking that America is sending airstrikes to Raqqa, your new home, to kill all Muslims, when really America’s goal is to kill the Islamic State. Now, even if America could somehow convince this child and his peers that it only wants to eliminate the Islamic State—which, it does, and has publicly announced it will do—they have been taught to love the Islamic State and everything it represents.

In essence, these children, if continued to be brought up learning the ways of ISIS, will ultimately pose a much greater threat to Baghdad, Damascus and the Western world than their fathers and mentors did. Many adults in the Islamic State learned to speak the language of violent jihadism as just that—adults. Take the moldable, impressionable young mind of a child and teach him the language of violent jihadism at age seven, and he will speak it more fluently than his predecessors.

How, then, can these children be pulled out of the brainwashed state of mind in which IS militants have placed them? How can we reverse the teachings of ISIS? The simple answer: we probably can’t. However, there may be a way to discredit the teachings.

The Islamic State preaches that it carries out Allah’s will by purging the world of (mostly Western) infidels who wish only to kill Muslims and by spreading the Caliphate. It preaches that Sharia can be implemented only with weapons (which conveniently supports ISIS’ love of violence). Well, unfortunately, by implementing airstrikes, we are confirming—in the minds of those children—that what their leaders tell them about Western “infidels” is true.

So why doesn’t the Western world just cease with its counterinsurgency strikes on the Islamic State? Aside from the fact that it would force the Arab states and other regional actors whose security is more threatened by ISIS than ours is to lead the fight against the Islamic State, if we don’t kill any Muslims, then the preachings of ISIS to these children will be rendered falsehoods. Some psychologists assert that when parents or parental figures lie to children, they lose faith in those figures and are less likely to trust them, causing confusion and doubt within themselves and about those around them. If these children became disenchanted with their mentors, because they believe they are being lied to, there would likely be less of a chance that they would grow up to be ruthless, bloodthirsty jihadis blindly following, and ultimately leading, the Islamic State.

The children of ISIS are told that infidels are killing Muslims, and sure enough, they see America killing Islamic State militants. However, if the foundation of what they have been taught is flipped upside down, and they do not see Americans killing Islamic State militants, they may start to question the validity of the Islamic State’s leaders and their claims. Since many in the West have already asserted that airstrikes against ISIS are not working, and since the only other effective addition to the anti-ISIS campaign—sending ground troops—is an unpopular option, there does not seem to be much of an argument for continuing to attempt to eliminate the Islamic State—especially if by doing so, we are only showing those young, budding jihadis that their leaders are right and that their jihad is justified.

Rebecca M. Miller is an Assistant Editor at The National Interest. She tweets at @RebecMil.