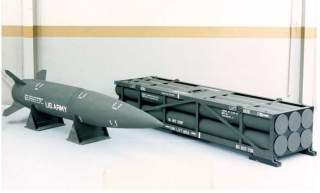 At the CSIS’s Third Offset Conference last week, Defense Secretary Ash Carter announced that Will Roper’s Strategic Capabilities Office has found a solution to the United States’ shortfall in coastal artillery. The simplicity is almost obvious: modify the Army’s existing Army Tactical Missile System (ATACMS) with a anti-ship seeker. This means, as Sydney Freedberg wrote for Breaking Defense, that “after at least two years of pressure from Congress and vague promises from Pentagon leaders, and for the first time since the Coast Artillery Corps was disbanded 66 years ago, the Army is officially back in the business of killing ships.” As I wrote two years ago on this issue, there were quite a few ways of reestablishing this capability, but Carter’s people might have found one of the best.

To understand why, let’s recount the background on the weapon. The MGM-140 ATACMS is the Army’s heaviest and longest-range missile: the latest version carries a 230-kilogram unitary warhead out to 300 kilometers. The service fired 32 in the 1991 campaign against Iraq, and 450 in the 2003 campaign. Along with some weapons fired in Afghanistan, the combat count stood at 560 rounds fired through last year, so it’s clearly a proven weapon. Contractor Lockheed Martin has produced about 3,700 ATACMS, mostly for the US Army, but also for military forces in Bahrain, Greece, Taiwan, Turkey, South Korea, and the United Arab Emirates. (Some of the South Korean weapons were built under license locally.) This means that plenty remain in inventory for modification.

When an ATACMS comes down, the warhead is descending from as high as 50 kilometers, and moving in excess of Mach 3. That’s hard to shoot down, and the speed alone imparts another 10 to 20 percent in (kinetic) energy. If there’s a negative, it’s that a ballistic missile is much easier to spot earlier than a sea-skimming cruise missile. Then again, the added ballistic threat divides the attention of any ship’s air defense team. The launchers and their reloads must be moved into theater, but the Air Force’s C-17s move faster than the Navy’s destroyers. It’s also a very survivable weapon: the tracked launcher is hard to find before it shoots, and hard to hit once it scoots.

In an essay on the coastal artillery question back in October 2014, I noted that “there are hard ways and easy ways for an army to stand up new capabilities.” This is the organizationally easy way. In another essay in December 2014, I wrote how “organizational culture and bureaucratic politics affect defense planning,” and most certainly in regards to coastal artillery. This move requires no fight with the Army over reestablishing the Coast Artillery branch with new and separate units. New seekers on old ATACMS will just add to the equipment options of existing Army missile battalions, and the Army has more than a few of those. Adding the mission requires some change in training and doctrine, but the field craft is pretty similar. Targets will be found mostly by drones, patrol planes, and coast watchers, so the artillerists mostly just need to fire when they get the order from higher headquarters. Integrating the Army into the sea battle was always going to require some work anyway, but this way, there will be not so much new work at the battalion level.

Note that this is also an easy upgrade for any ATACMS customer—most notably Taiwan, which bought 226 missiles in 2010. Firing the ATAMCS requires a modification to the Multiple Rocket Launch System (MLRS) launcher, but customers who bought only the smaller MLRS rockets—Egypt, Finland, France, Germany, Israel, Italy, Japan, Saudi Arabia, and the United Kingdom—could be induced to upgrade some launchers for the new payload. Several of those countries already have truck-mounted anti-ship cruise missiles, but this ATAMCS upgrade would provide them a short-range anti-ship ballistic missile too.

In short, this move is possibly the most economical way to restore a coastal artillery capability to the US armed forces. At that same CSIS event, Under Secretary Frank Kendall was complaining that he doesn’t have enough money to proceed past mere prototypes of Third Offset systems. As Major General Jeff Newell, the USAF’s chief strategist, recently wrote, the alternative is to stop doing something else. That’s generally good advice, for not every Third Offset choice will be this easy. In this particular case, however, the Defense Department won’t need to choose, so everybody wins. Well, maybe everybody except the Chinese Navy.