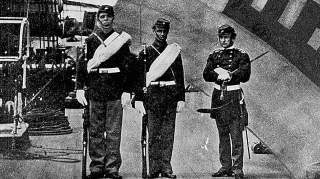 On June 1, the Monocacy, the Palos and three small cutters set sail down the Han River on a river charting expedition heading towards Seoul. As they made their way, the American boats approached a bend in the river overlooked by three forts. They could see troops lining the ramparts. As the U.S. ships made their way around the bend, a shot cracked through the air, signaling the commencement of an ambush. The Korean soldiers rained heavy fire on the American ships with antiquated cannons and enormous tripod-mounted jingal matchlock muskets. However, even as hot metal sprayed the water around the American ships, it inflicted little damage—the old weapons were inaccurate and could not easily adjust their aim.