A Time for Deterrence 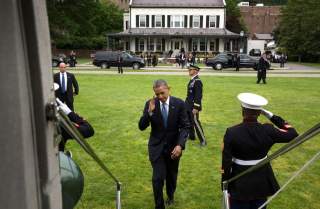 American politician and poet Eugene McCarthy once said that the media are like blackbirds on a telegraph pole. Once the impulse goes through, they all jump in the same direction. Fortunately for McCarthy, the Washington punditocracy was not as developed then as it is now.

No sooner did Washington and the European Union announce that they were considering new sanctions on Russia for its war in Ukraine then the Beltway cognoscenti sprang into action with a new line. Unfortunately, it is the same line echoed by Moscow, consisting of the following arguments: First, the new sanctions will not work or really hurt Russia, but will push Moscow and Putin into a corner from where Putin might lash out and stage an even bigger invasion of Ukraine than has hitherto been the case. Second, and related, is that we therefore have to negotiate with Russia over the future of its role in the lands of the former Soviet Union.

Moscow has added to this line of reasoning through its own arguments. Not only do Russian spokesmen breathe defiance and dismiss Western sanctions as ineffectual, Foreign Minister Sergei Lavrov has complained disingenuously that Moscow does not know what Washington wants of it. He has further added that even if there had been no Ukrainian crisis, NATO would, in any case, have found new ways to commit aggression against Russia.

The fallacies of these arguments are obvious. First, they do not square with the facts. It is quite clear what the West wants: namely, an end to the invasion of Ukraine, the withdrawal of Russian troops, the cessation of all acts of belligerency against Ukraine and neighboring states, and the recognition of the new Ukrainian government.

As well, in the wake of mounting sanctions, Russian President Vladimir Putin has doubled down, sending more weapons to Ukraine, evidence suggesting the shelling of Ukraine from Russia, and dispatching more of Moscow’s “specialists”, including Vladimir Antufeyev.

As a result, there is nothing to talk about. It is abundantly clear that Moscow does not accept existing borders or respect the sovereignty of the countries of the “post-Soviet space,” despite a host of treaties that it has signed to that effect. Offering negotiations that might reward its aggression only strengthens Putin’s belief that he is dealing with weak, corrupt governments lacking in the courage to defend their interests openly.

Classical deterrence theory teaches us that it is necessary to make the deterrent threat to an aggressor sufficiently credible and palpable so that he can readily see that that his costs will escalate out of control unless he reverses course. Having bet his future and that of Russia in a struggle over Ukraine, Putin can be stopped only by a deterrent threat of sufficient magnitude—such as providing Ukraine with the military weapons and financial assistance it needs to expel the invaders and begin to set its house in order. Only such a step will register in Moscow as a sign of unmistakable resolve on the part of the United States and Europe.

It is the collective fault of Western governments that to date they have been too timorous and concerned for their investments to grasp this state of affairs. Their hesitation has allowed Putin to bring us to this point, at which the threat of a wider war in Europe now lurks in the wings. But it is not too late for us to regain the policy initiative and take the steps necessary to not only sustain Ukraine, but also preserve Europe and bolster international security in the process.