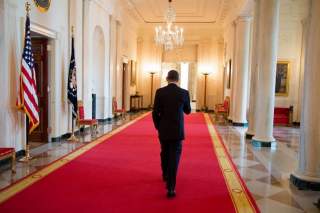 Secretary of State John Kerry will join leaders from around the world to sign the Paris Protocol global warming agreement this Friday at the United Nations headquarters.

Here are the top five reasons Congress and the next administration should withdraw from the accord:

The economic impact of domestic regulations associated with the Paris agreement will be severe. To meet America’s commitment to reduce carbon dioxide emissions, the administration will need to drive the cost of conventional fuels higher so households and businesses use less.

Because energy is a necessary input for almost all goods consumers buy, households are hit by higher prices multiple times over. Global warming regulations will increase electricity expenditures for a family of four by at least 13 percent a year. Cumulatively, they will cost American families over $20,000 of lost income by 2035 and impose a $2.5 trillion hit on the economy.

2) No impact on climate.

Regardless of one’s opinions on the degree to which climate change is occurring, regulations associated with the Paris accord will have no meaningful impact on the planet’s temperature.

Even if the government closed the doors to every businesses and CO2-emitting activity in the U.S., there would be less than two-tenths of a degree Celsius reduction in global temperatures.

Even Kerry admitted during the negotiations last December that:

Though the Paris Protocol is an international agreement, there is little reason to believe that the developing world (India, China, etc.) will prioritize reducing cargo dioxide emissions over using affordable energy that provides their citizens with a better standard of living.

Yes, China and other developing countries have serious air and water qualityproblems from industrial byproducts. But do not associate those problems with carbon dioxide. Carbon dioxide is a colorless, odorless and non-toxic. The focus of the Paris Protocol is to address catastrophic global warming. The developing world has more pressing tangible environmental challenges, which they’ll be able to address when they’re wealthier and have the necessary means to tackle them.

An important part of the Paris agreement for the developing world is money. More specifically, other peoples’ money. In Nov. 2014, President Barack Obama also pledged to commit $3 billion to the Green Climate Fund, an international fund for green projects in the developing world.

The administration and proponents of a Green Climate Fund have repeatedly called for spending $100 billion per year between the United States and other countries in public and private financing to combat climate change.

In March, the Obama administration made a $500 million taxpayer-funded payment to the Green Climate Fund despite Congress never having authorized the funding.

The Green Climate Fund is nothing more than a taxpayer-funded wealth transfer from developed countries to developing ones. The fund will do little to promote economic growth in these countries but instead connect politically-connected companies with taxpayer dollars.

The Paris agreement is in form, in substance, and in the nature of its commitments a treaty and should be submitted to the Senate for review and consent. The executive branch has shown contempt for the U.S. treaty-making process and the role of Congress, particularly the Senate.

As my colleague Steven Groves writes and explains in great detail, “The argument that the U.S. Nationally Determined Contribution “targets and timetables” are not legally binding and therefore the Paris Agreement is not a “treaty” requiring the advice and consent of the Senate simply has no basis in law.”

This is the first time in the history of mankind that we are setting ourselves the task of intentionally, within a defined period of time to change the economic development model that has been reigning for at least 150 years, since the industrial revolution.

A top-down, concentrated effort to shift away from the use of coal, oil and natural gas will prevent millions from enjoying the basic energy needs Americans and the developed world takes for granted. In the industrialized world, the effects of moving away from conventional fuels have been devastating at times. Fuel poverty and pricier energy caused tens of thousands of deaths in Great Britain because families could not heat their homes. The world runs on traditional fuels because they are cost competitive and abundant. If and when any transformative shift away from these natural resources occurs, it will be driven by the market.

The Paris agreement, and U.S. participation in the entire framework convention on climate change is a raw deal for Americans. The next administration should not only withdraw from Paris but the entire United Nations Framework Convention on Climate Change.