Trump Administration is Writing Checks the U.S. Military may not be Able to Cash 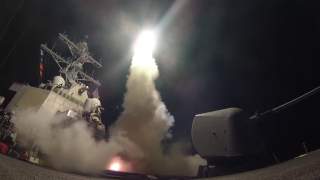 The Trump Administration isn’t just talking tough when it comes to countering the unacceptable behavior of rogue regimes and deterring hostile powers; it is acting that way too. Sixty Tomahawk cruise missiles were fired at a Syrian airfield. Additional Special Operations Forces are being sent to fight ISIS. The USS Carl Vinson carrier battle group is heading for the waters off the Korean peninsula. The U.S. Army has established a continuous rotational presence in Europe of an armored brigade combat team and associated aviation and logistics assets. A Terminal High Altitude Area Defense anti-missile battery is being deployed to South Korea.

The Washington policy community has largely applauded all of these actions, as they have the administration’s tougher line on the Assad regime in Syria, the North Korean nuclear program and Russian behavior in Eastern Europe and the Middle East. They are equally relieved that criticism of NATO has been toned down, the Iran nuclear deal was not torn up on the President’s first day in office and there is no sign of a trade war with China. The foreign and defense policy elites see these as a sign that President Trump’s national security team is, in the words of Wall Street Journal columnist Gerald Seib, steering the administration’s foreign policy towards the center.

The problem with this “centrist” foreign and security policy is that the administration is making ever greater demands on a military that is undersized, overstretched, rapidly aging and, frankly, somewhat confused about its primary missions. Add to these problems the damage done to the readiness and modernization of the military by sequestration, a continuing resolution that has now lasted for more than half the budget year and the apparent decision by Republican leaders in the House and Senate to shelve the administration’s proposed defense budget supplemental. As a result, the U.S. military is ill-prepared to deal with one major regional contingency much less the three or four that a “centrist” approach to the world has made more likely.

Senior members of the military made the obligatory pilgrimage up to Capitol Hill earlier this year to testify as to the state of the Armed Forces. In virtually every case the message was the same: as a consequence of years of underfunding, the U.S. military is at the breaking point. Mind you, this is in the absence of a major conflict. According to the Army representative, in order to maintain enough ready forces, his service has “accepted considerable risk by reducing end strength and deferring modernization programs and infrastructure investments. These trade-offs reflect constrained resources, not strategic insight.” The Navy representatives acknowledged the effort to ensure that deployed forces are ready has come at the expense of the rest of service. “…[W]hile our first team on deployment is ready, our bench – the depth of our forces at home is thin. It has become clear to us that the Navy’s overall readiness has reached its lowest level in many years.” Air Force leaders joined this somber chorus, pointing out that “sustained global commitments combined with continuous fiscal turmoil continue to have a lasting impact on readiness, capacity, and capability for a full-spectrum fight against a near-peer adversary.”

The Department of Defense has created the dangerous illusion of undiminished U.S. military prowess by ensuring the readiness of deploying forces at the expense of force size, modernization, infrastructure recapitalization and training. In fairness to those in uniform and their civilian counterparts, they had no other choice. It made no sense to prepare for the next war while losing the ones you were currently fighting. In addition, for most of this century, the risk of major conflict with a regional power or near-peer was judged to be extremely low. But that is no longer the case.

Each of the services has a credible plan to repair the damage done over the past decade or so. But funding limitations are forcing them to modernize at a pace that is not only uneconomical but irrelevant to the growing threat. For example, at current production rates, the Air Force, Navy and Marine Corps will not receive their full complements of F-35 fighters until approximately 2037. The Army’s plan to upgrade its fleets of tanks, armored fighting vehicles, artillery and rocket launchers could take two decades. Having upgraded the lethality of a portion of one Stryker brigade combat team, the Army may not do another for three years. Even with additional funding, the Navy will not achieve its goal of 355 ships until the 2030s. At current funding levels, it won’t even make 300.

The Trump Administration is talking tough – cheered on by a Congress unwilling to eliminate sequestration or spend enough to address the force size and modernization problems – even as the combat capability of the U.S. military continues to decline. Without a major and sustained increase in the defense budget, the U.S. military will continue to decline relative to the number and complexity of the missions it is given and the growing power of prospective adversaries. If the Trump Administration wants to write checks that the U.S. military may be required to cash, it and the current Congress must provide adequate defense budgets.