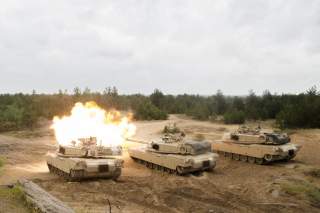 Since the founding of the North Atlantic Treaty Organization (NATO), the United States has carried a disproportionate share of the burden for defending the West. Indeed, today, in addition to America, only four allies meet the 2 percent of GDP NATO defense spending requirement: the United Kingdom, Poland, Greece and Estonia.

After eight years of the Obama administration hollowing out America’s armed forces, and given the dangerous situation the world now faces from Islamic extremists, Iran’s proxy wars across the Middle East, Russia’s invasion of Ukraine and threats against its neighbors, and China’s “great wall of sand” in the South China Sea, the United States needs its allies to finally get serious about contributing to the common defense of the free world.

American presidents have decried this situation for years. In 1980, Ronald Reagan even made a campaign issue of it, promising in his national defense brochure to “seek greater consultation and cooperation with our European allies—fully expecting each one of them to bear a fair share of the common defense effort—in order to maintain a strong NATO as a counterweight to the Soviet Union’s continuing arms build-up."

In 1997, Bill Clinton’s Secretary of State Madeleine Albright said that she would “insist that our old allies share this burden fairly. That’s what NATO is all about.” In 2010, Secretary of Defense Robert Gates claimed that NATO’s budget crisis was a “temptation to miscalculation and aggression” by America’s adversaries. In his recent Atlantic interview, President Obama went so far as to call America’s allies “free riders.” Unfortunately, these appeals have fallen on deaf ears.

Enter candidate Donald Trump. From March 21 to March 29, 2016, Trump made his feelings about NATO members’ failure to live up to their defense spending obligations abundantly clear. In the Washington Post, he stated: “NATO is costing us a fortune and yes, we’re protecting Europe but we’re spending a lot of money. Number 1, I think the distribution of costs has to be changed.” He told the New York Times, “NATO is unfair, economically, to us, to the United States. Because it really helps them more so than the United States, and we pay a disproportionate share.” On the Charlie Sykes radio show, Trump escalated the rhetoric: “We are getting ripped off by every country in NATO.” Then, at a rally outside Milwaukee, he laid out the consequences of continued allied inaction: “Either they have to pay up for past deficiencies or they have to get out.”

Trump’s comments on NATO were criticized by his Republican competitors, and Hillary Clinton brought up Trump’s NATO views repeatedly in the presidential debates. Trump was accused of undermining the NATO alliance and causing our allies to lose confidence in America’s commitment to them. But something amazing started happening: America’s allies began pledging to increase their defense budgets. For example, on October 15, Germany said that it was going to spend €1.5 billion on five new corvettes to patrol the Baltic Sea, and that the ships would be dedicated to NATO missions.

The trend picked up speed after Trump was elected. On November 17, Great Britain announced that it was buying twenty-six new Predator drones from General Dynamics for $1 billion. On November 28, Norway stated that it would purchase five P-8A Poseidon maritime patrol aircraft from Boeing for $1.15 billion. On December 5, Poland’s ministry of defense rolled out a massive $14.5 billion program to modernize that nation’s military.

Even America’s non-NATO allies are getting in on the act. Most notably, on December 5, South Korea’s parliament approved the largest defense budget in its history—$34 billion, much of which will be spent on modernizing ships and aircraft. Since late summer, New Zealand has also promised several new shipbuilding programs to modernize its small but capable navy.

All of this, and the president-elect has not even taken office yet. We may be witnessing the most impressive presidential transition from a national-security standpoint in history. Wait until Secretary of Defense Mattis and America’s secretary of state and NATO ambassador start hammering this message home to our allies. The message will have added impact, because Trump has promised to rebuild America’s military and return the United States to a posture of peace through strength. If the United States is making such a sacrifice, you can bet that President Trump will expect a similar effort by our friends in what has sadly become a very dangerous world.

During the campaign, Trump would often say at his rallies that “we’re going to win so much that you’ll get tired of winning.” At least with respect to our allies bearing their fair share of the defense burden, he may very well have been right.

Robert C. O'Brien is a partner at Larson O’Brien LLP. He served as a U.S. Representative to the United Nations. O'Brien was also a Senior Advisor to Governors Scott Walker and Mitt Romney as well as Senator Ted Cruz during their presidential campaigns. His book While America Slept: Restoring American Leadership to a World in Crisis was recently published by Encounter Books. Robert can be followed on Twitter: @robertcobrien.