Trump, Putin and Kim Jong-un Walk Into a Deterrence Bar 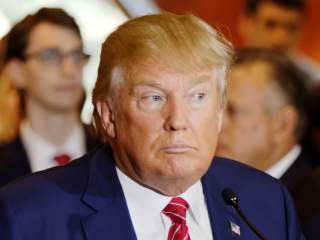 Should we wring our hands and roll our eyes in the face of such Trumpisms? Or has “The Donald” captured an essential truth about the art of leadership and the deterrence of naked aggression?

In fact, all Donald Trump is doing is tipping his “Make America Great Again!” cap to the power of the “Madman Theory” first espoused in American politics by President Richard Nixon.  This theory is a well-known staple of game theory, and one of the most important tools used to analyze various strategies to deter aggression and prevent the use of nuclear weapons.

In Nixon’s case, he deliberately feigned angry and erratic behavior as a strategy to convince the North Vietnamese to agree to American terms during the Paris peace negotiations. In describing his “Madman Theory” to an aide, Nixon revealed:

“I want the North Vietnamese to believe I've reached the point where I might do anything to stop the war. We'll just slip the word to them that, ‘for God's sake, you know Nixon is obsessed about communism. We can't restrain him when he's angry—and he has his hand on the nuclear button’ and Ho Chi Minh himself will be in Paris in two days begging for peace.”

Of course, in this particular negotiation, Nixon’s feigning of madness failed miserably in deterring North Vietnam’s aggression. Indeed, North Vietnamese negotiators knew full well that Nixon was more desperate than mad. That left Henry Kissinger with little leverage in Paris, and North Vietnam took Nixon and Kissinger to the negotiating cleaners—ultimately taking South Vietnam from an America in full retreat.

The failure of Nixon’s madman ruse notwithstanding, the importance of madness versus rationality in deterring ruthless and “crazy” guys like Vladimir Putin and Kim Jong-un can be highlighted by taking a page out of the book of game theorist Thomas Schelling.  Here’s how Schelling might put the current North Korean conundrum:

“If North Korea’s Kim Jong-un does not act according to America’s conventional assumptions and international norms of behavior, America will consider Kim’s behavior “irrational,” and Kim’s perceived irrationality might result in him winning the competition. However, if Kim is not really irrational but simply but simply using his madman behavior as part of a conscious bargaining or competitive strategy to get more food and fuel from the West while holding on to his nukes, then this so-called irrationality is effectively rational in relation to the game’s ‘payoffs.’”

In other words, the feigning of “madness” can be “wickedly rational.”

As to how this applies to any American president dealing with the likes of Putin and Kim, here’s the obvious deterrence problem: Both Putin and especially Kim Jong-un project a willingness to start a nuclear war to get their way. Since that would mean the end of the world as we know it, many political leaders in the West perceive this behavior as irrational.

So far the “rational” response of the Obama White House to Putin’s particular brand of brinkmanship and “craziness” has been to use economic sanctions as a means of forcing Russia to cease its revanchist aggression. With Putin not fearing any military intervention—because he believes President Obama fears any such intervention might lead to nuclear war—Putin continues to have his ruthless, revanchist and really quite rational way with Ukraine and parts of Eastern Europe. And that is exactly what Donald Trump is seeing in “Vladimir the Great” and why he admires Putin—certainly not for his aggression but at least for his rational madman cunning.

So what if Trump were elected president instead of ratiocinators like Hillary Clinton or Bernie Sanders or Marco Rubio? In this scenario, Putin would know Trump is as rationally “mad” as he is and that Trump won’t never back down should Russian push come to American shove. Understanding he has met his madman match, Putin should therefore be far less likely to press the revanchist envelope in the same cavalier way he now does with the ultimate ratiocinator, President Obama. Score one for a “crazy” Trump.

In fact, a hawkishly uncertain demeanor was the ultimate power of Ronald Reagan in dealing with the Soviet Union. Soviet leaders could never really be sure what “the cowboy” would do, and in this way Reagan quite rationally kept the peace.

In the case of Kim Jong-un, the Obama White House likewise is pursuing a rational “carrot and stick” path. The carrot has been the prospect of aid to North Korea if it disarms while the stick as been the same kind of economic sanctions strategy Obama is (mis)using with Russia. Thus far, of course, this has been an utterly failed policy as a “crazy” Kim continues to test his bombs, refine his missile technology, and advance his nuclear proliferation agenda.

As for what steps the next American president might take to rein in a “crazy” North Korea, the most obvious is to put the clamps down on China—a country that is not just North Korea’s primary benefactor but also America’s largest trading partner. At this juncture, a President Trump appears to be far more likely to take such a dramatic step without regard for the economic consequences than any of the other candidates on either side of the aisle. Knowing this, China should therefore be more likely to crack down on North Korea and thereby avert a confrontation under a Trump presidency. Score another one for a “crazy” Trump.

The second, more draconian, option to deal with North Korea is to simply drop a precision bomb on Kim Jong-un and eliminate him. And here’s the Trumpian rub: If Trump were elected president, Kim might actually begin to fear that Trump might indeed hunt him down with a swarm of F-22s, a drone or a long-range missile.

In this scenario, the United States wouldn’t even have to assassinate Kim. All Kim would have to believe is that a President Trump would be “crazy” enough to do it; and that would be enough to restrain Kim’s behavior.

And so the dance of deterrence goes—and so goes the argument that a “crazy” Donald Trump is actually smart like a fox and more likely to bring about peace in Eastern Europe and Asia than a “rational” President Obama who relies on the tools of conventional western diplomacy. It’s risky business of course, but so far ratiocinator diplomacy is striking out from Moscow and Beijing to Pyongyang.

Peter Navarro is a professor at the University of California-Irvine.  He is the author of Crouching Tiger: What China’s Militarism Means for the World (Prometheus Books) and director of the companion Crouching Tiger documentary film series.  For more information and to access film interview clips, visit  www.crouchingtiger.net or see his book talk on CSPAN2.