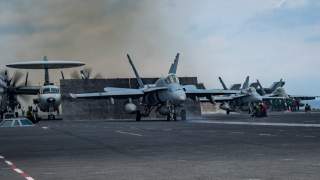 A U.S. Navy carrier strike group is on its way to Korea, and may get some company from a close regional ally.

President Donald Trump said Tuesday that an “armada” is sailing towards Korea in a show of force. “We are sending an armada. Very powerful,” the president told Fox Business Network. “We have submarines. Very powerful. Far more powerful than the aircraft carrier. That I can tell you.”

The Nimitz-class aircraft carrier USS Carl Vinson is moving towards the peninsula with several guided-missile destroyers and cruisers. Reports suggest that Japanese Maritime Self-Defense Force vessels will join up with the U.S. carrier strike group.

Japan, the only country to have ever been on the receiving end of an atomic bomb, is deeply troubled by North Korea’s continued pursuit of nuclear weapons. After North Korea launched four extended-range scud missiles into the Sea of Japan in a reported rehearsal for strikes on U.S. bases in Japan, the Japanese government began looking into options to not only boost national missile defense capabilities, but also to return fire if North Korea launched an attack.

North Korean provocations have been frequent occurrences in recent weeks, as the reclusive regime has fired off multiple missiles and tested long-range rockets for a possible intercontinental ballistic missile while threatening nuclear war.

In response to the deployment of additional strategic assets to the region, the Rodong Sinmun, the newspaper of the ruling party, wrote, “Our military is keeping an eye on the movement of enemy forces while putting them in our nuclear sights.”

“Should the U.S. lose rationality and make the slightest movement to conduct preemptive strikes against us, our mighty nuclear weapons will obliterate the strongholds of invasion and provocation,” the paper added.

The U.S. and its Asian allies are concerned that the North will engage in additional provocations to mark certain key events in April, specifically the anniversaries of the birth of Kim Il-sung on April 15 and the founding of the Korean People’s Army on April 25. North Korea has already said that the world can expect “big” events this month. Last year, North Korea conducted missile tests on and just before these two dates.

With its increased military presence in the region, America could rain on North Korea’s parade if necessary.