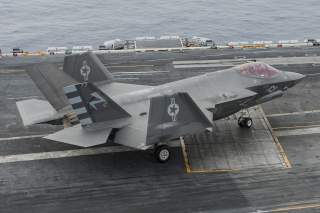 Since the election, President Donald Trump has been making headlines with his promise to look at more Boeing F/A-18E/F Super Hornets as an alternative to Lockheed Martin’s F-35 Joint Strike Fighter.  He has also discussed asking Boeing to develop an improved Super Hornet as part of this alternative acquisition path.  Clearly, Trump has been reading the news about these programs… from 2013.

As Secretary of Defense Jim Mattis has explained, Trump’s comments only affect the F-35C model.  Yet the F-35C is easily the weakest member of the F-35 family in terms of customer enthusiasm.  The F-35B is needed to make the U.S. Marines’ fleet of amphibious assault carriers work (no, the F/A-18 can’t fly vertically).  The F-35A is fully supported by the Air Force as the only plane that meets its needs (and the service has no interest in the Super Hornet, which is optimized for carrier operations).  The F-35A has at least ten customers worldwide, while the F-35B has the Marines, the UK Royal Navy and the Italian Navy.

By contrast, the F-35C has exactly one customer, the U.S. Navy.  Yet the Navy seems less than thrilled with the idea of buying it.  Between FY 2013 and 2017, the Navy procured 102 F/A-18E/Fs and EA-18G Growlers.  In the same period, the Navy procured 22 F-35Cs.  However, some of these were destined for the U.S. Marines, and not big carrier NAVAIR.  Thus, the Navy seems to have prioritized Super Hornet acquisition over F-35Cs by a factor of five or ten to one.  And last year saw Boeing sign one new firm and one new probable F/A-18E/F customer (Kuwait and Canada, respectively).  With Australia, there will now be four Super Hornet operators.

By comparison with those 22 F-35Cs, in the same period the US military air arms ordered or requested 205 F-35As and Bs, with scores more ordered by foreign customers.  In terms of numbers, the F-35C is simply not a very important part of the Joint Strike Fighter procurement program.

Meanwhile, after years of counting on Congress to add Super Hornets to its annual budget, the Navy last year resumed requesting Super Hornets in its base budget.  Its current plan calls for it to keep doing so, probably with even higher annual procurement numbers.  Trump will almost certainly claim credit for any block orders associated with these purchases.

Clearly, Trump wants to appear like he’s in charge of military requirements (and F-35 pricing improvements).  But to do this, he sometimes needs to take credit for events that took place years in the past.

Richard Aboulafia is Vice President, Analysis at Teal Group. He manages consulting projects for clients in the commercial and military aircraft field, and has advised numerous aerospace companies. He also writes and edits Teal's World Military and Civil Aircraft Briefing, a forecasting tool covering over 135 aircraft programs and markets.