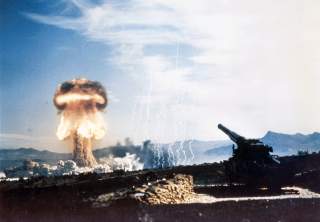 President Donald Trump wants a new nuclear weapon. Just a “small” one, no bigger than the ones that leveled Hiroshima and Nagasaki in 1945.

Why? The president’s advisors think Russia “apparently” believes Trump might be reluctant to use some of the 4,000 nukes he already has because they are massively destructive. That would be crazy. But this new one, with a lower yield, would be more “usable” against Russia because it would cause less damage.

This is not a new idea. Nor is it a good idea. It’s a mash up of two old, bad ideas that get even worse when you put them together—kind of the opposite of a Reese’s Peanut Butter Cup. And Congress has already rejected both ideas—on a bipartisan basis.

The first bad idea was to build a new, “smaller, friendlier” nuke. In 2005, Congress killed a Bush administration plan for a new “low-yield” nuclear bomb (which actually could have had variable yields) called the robust nuclear earth penetrator. This bomb was meant to target underground bunkers in “rogue” states. Problem was, a nuclear weapon was not needed for this mission, and it raised the danger that a nuke might be used when conventional weapons could do the job. As Rep. David Hobson (R-Ohio) said in 2004, “What worries me about the nuclear penetrator is that some idiot might try to use it.”

The second bad idea was to put a new warhead on Trident missiles. In 2006, Congress killed Bush’s plan to put a conventional warhead on Trident submarine-launched missiles to go after terrorists or rogue states. This idea flopped because Trident missiles only carry massive nuclear warheads, and if you launch one with a conventional warhead, the Russians might think they were under nuclear attack and retaliate by nuking the United States. A country “might legitimately worry whether the weapon carries a nuclear or conventional payload. This could be a provocative action, if taken,” said Sen. Ted Stevens (R-Alaska).

Regrettably, Trump has now brought these zombies back from the grave and put them into a blender. The result: a “low-yield” nuke that Trump might actually use on a Trident missile that Moscow would assume carries a huge city-buster. Such a case of mistaken identity could cause Russia to unleash a full-scale nuclear attack against the United States.

Adm. James Stavridis, former supreme allied commander in Europe and Dean of the Fletcher School of Law and Diplomacy, called this “a destabilizing mistake” because “once a conflict goes nuclear, it could become impossible to contain.”

The Trump administration’s plan is to produce new warheads with an undefined “low” yield to be deployed on Trident missiles—along with the existing higher-yield warheads. Trump’s rehashed plan has at least three major drawbacks:

Just like the plan for a conventionally armed Trident, Trump’s plan would cause potentially catastrophic confusion—only worse, because in this case the weapon is meant for Russia. Moscow would see the Trident missile coming, but would have no way of knowing if it is armed with a “big” nuke or a “small” one. As Air Force Gen. John Hyten said, if Moscow wants to know what is on the missile, “they will find out in about 30 minutes”—in other words, after the warhead detonates. But the whole point of using a “small” nuke to “control” a conflict is lost if Russia has no idea what is coming at them.

Just like the nuclear earth penetrator idea, Trump’s plan increases the danger that nuclear weapons will be used and lead to nuclear war. Trump’s advisors would have us believe that if nuclear war starts small, it would stay small. But what if Russia thinks the small initial attack is just the first wave of a massive onslaught? Then the rational move (if thermonuclear war can called rational) is for Moscow to hit back with everything they’ve got.

There is simply no such thing as limited nuclear war, and preparing for one is folly. As Secretary of Defense Jim Mattis said this month: “I don’t think there’s any such thing as a tactical nuclear weapon. Any nuclear weapon used at any time is a strategic game changer.”

The rationale for this weapon is based on a theory laid out in the Nuclear Posture Review, which goes like this: “Moscow apparently believes that the United States is unwilling to respond to Russian employment of tactical nuclear weapons with strategic nuclear weapons.” So to close this “deterrence gap,” we supposedly need new tactical, or low-yield, nukes.

“Apparently”? Moscow “apparently” thinks something so we need to spend millions of dollars and risk nuclear war to respond? This is senseless and dangerous. There is no compelling evidence that Russia believes that it can take advantage of the United States because Trump would not retaliate with the atomic bombs he already has. (By the way, the Trump administration plans to spend $1.7 trillion to rebuild the arsenal over the next thirty years.) In fact, it would undermine Trump’s credibility in this area to build new low-yield nukes, and thereby admit he is not willing to use the bigger ones. This is self-defeating logic.

The Trump administration just submitted its fiscal year 2019 budget to Congress, which includes at least $50 million to build this new Trident warhead over the next few years. Sixteen senators wrote a Jan. 29 letter to Trump out of concern that his new policies "increase the risk of a nuclear arms race and raise the real possibility of nuclear conflict." This new warhead is dangerous, unjustified, and has already been rejected by Congress in previous lives. It is now up to Congress to stop Trump from bringing this zombie back from the dead.

Tom Z. Collina is the Director of Policy at Ploughshares Fund.