Trump's Syria Strike Is a Textbook Case of Deterrence 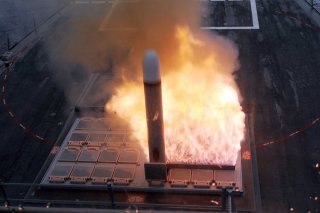 The US strike on Syria signals the first decisive action by a White House administration coming to terms with its foreign policy responsibilities in an ever more precarious international order. In a move that was no doubt intended to send as much of a message to Moscow and Pyongyang as it was to the Assad regime in Syria, the US has seized the initiative amidst growing uncertainty about its role in the world since Donald Trump took office.

The circumstances of the chemical attack in Khan Sheikoun were impossible to ignore and left many in the international community wondering—if this isn’t the time to send a decisive message to those prosecuting the war in Syria, when would be? For an administration struggling to find its feet the case for direct military action was too compelling to ignore. The White House was not alone. Ahead of the decision, Hillary Clinton had been making the case for such a strike. It’s likely that even an Obama Administration couldn’t have ignored this most recent attack.

Many forget that the infamous ‘red-line’ warning postulated by Obama in 2012, was the genesis of UN Security Council Resolution 2118 and a commitment from Russia to destroy all chemical weapons in Syria in 2013 after the Ghouta attack in Eastern Damascus. Chemical attacks in Syria and Iraq have persisted, with most occurring on a limited scale and without it being clear who carried them out. Some stockpiles of chemical weapons have fallen into the hands of opposition groups and most chemical attacks have involved the use of makeshift chlorine gas, making it harder to attribute responsibility. A US military response in circumstances where it wasn’t possible to be sure who carried out a chemical attack was always unlikely under any White House administration.

So the circumstances of last Tuesday’s attack were important. Early open source reporting suggested that the only group capable of carrying out such a strike was the Syrian government. It’s also likely that the US was able by Thursday to assemble enough intelligence to pinpoint the perpetrator. Others have reported how the NSA and other US intelligence agencies are monitoring chemical weapons use in Syria and how data logs etc can be reviewed after such an attack to confirm its likely origin.

Assuming that intelligence confirming the attack was carried out by Assad’s forces, then the case for inaction needed to be weighed up as carefully as the case for unilateral action.

With Russia and Iran flexing their influence in support of the Assad government, the calculus surrounding a US strike was, and remains, precarious. The risk of a spiraling increase in tension with Iran and Russia needed to be considered closely. With growing economic, political and security challenges in Russia, as evidenced by last week’s St Petersburg attack, the incentive for Putin to use the situation to galvanize nationalist support and deflect attention away from domestic issues is substantial. But despite this, Russia wont want to risk an open conflict with the US. So the US decision to warn Russia prior to the strike was also an important one, aimed at limiting the fallout with Moscow.

Inaction by the US would, on the other hand, have been equally serious. To do nothing in the face of such a blatant violation of a Security Council resolution and Syrian assurances that chemical weapons wouldn’t be used would only reinforce the view that the US was withdrawing from the world. It would have sent the Syrian regime a signal that such actions have no consequence. If the Khan Sheikoun attack were carried out by a rogue commander, then the message was clear; grip-up your people or we’ll direct more strikes at government targets. The same message can be extrapolated to the Russian and Iranian governments. If you want to retain the free hand in supporting Assad, then using chemical weapons is a no-go.

That these events in Syria have occurred when the US is dealing with a complex situation in North Korea, and as a backdrop to the first meeting between Trump and President Xi, was circumstantial but opportune. Importantly, direct action in response to the chemical attack in Syria didn’t come at the expense of complicating issues with North Korea or China. Indeed, targeted military action in response to the chemical attack demonstrated resolve to an audience in Pyongyang that’s now the subject of a tough line in response to its own aggressive weapon proliferation efforts.

It’s not surprising then that the US action in Syria has met with widespread support from world leaders looking for responsible leadership of global security problems. In the wake of Trump’s election, many anticipated an era of US isolationism and accelerated erosion of the international security norms established at the end of World War Two. The challenge now is to develop an understanding of the framework that informs current White House thinking about such issues into the future.

This article originally appeared in ASPI’s The Strategist here.