Turkey Wants F-35Bs to Field an 'Aircraft Carrier in Disguise' 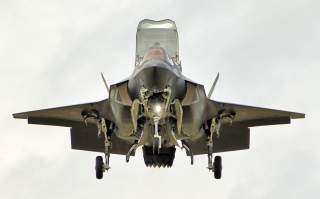 Turkey is the latest country to consider buying F-35Bs in order to field an “aircraft carrier in disguise.”

The Turkish newspaper Hurriyet Daily News reported the news on February 27. According to the paper, along with the 100 F-35As that Turkey is planning on buying to replace its F-16s, a fleet of F-35Bs are also “planned to be procured in line with Ankara’s growing interest in strengthening its naval forces, mainly for overseas operations.”

The F-35B is the Joint Strike Fighter variant that have short take-off and vertical landing (STOVL) capabilities. This enables them to operate off of smaller ships because they don’t need as long of a runway. Notably, as the Hurriyet report points out, Turkey is currently building a Landing Helicopter Dock (LHD)/Amphibious Assault Ship, TCG Anadolu, that would be able to launch the F-35B from its flight deck.

Turkey signed an agreement in 2015 with the Spanish firm Navantia for help in building Anadolu. It will be designed by Navantia and based on the Spanish landing helicopter dock (LHD) Juan Carlos I. According to some media reports, besides designing the ship, Navantia will supply five sets of diesel generators and the IPMS (Integrated Platform Management System) for it. Navantia built the Juan Carlos I and two similar ships for Australia, the HMAS Canberra and the HMAS Adelaide.

Construction on TCG Anadolu began in 2016 and is expected to be completed sometime in 2021. When finished, it will displace 28,000 tons fully loaded and measure 225 meters long and thirty-two meters wide. The ship will also be able to travel at speeds of up to twenty-one knots. From the beginning, Navantia designed the ship to be capable of launching the F-35B or a similar plane from the ship’s deck.

If Turkey’s new plan sounds familiar, that’s because both Japan and South Korea have been working on similar plans in recent months. As I noted last month, Japanese media outlets say that Shinzo Abe’s government is planning to publish budget documents outlining plans to purchase between 20–40 F-35Bs in the coming years.

One reason that Japan considers the STOVL planes to be valuable is they can operate from commerical air strips on isolated islands in case the country’s major military bases come under attack. At the same time, Tokyo also has its eyes on a pseudo aircraft carrier. Specifically, Japan is mulling the possibility of refitting its two Izumo-class helicopter destroyers to operate the F-35B. These ships are roughly 250 meters (820 feet) long and displaces 24,000 tons. That makes the Izumo-class destroyers about 50 percent bigger (in terms of displacement) than Japan’s next largest ship, the Hyuga-class helicopter destroyer. Others have pointed out that the Izumos are actually larger than Spain and Italy’s short take-off and vertical landing (STOVL) aircraft carriers.

Shortly after reports emerged about Japan’s interest in redesigning the Izumo, South Korea began exploring a similar option. In a December report, Yonhap News Agency quoted an unnamed South Korean military official as saying: “I understand that the military top brass have recently discussed whether they can introduce a small number of F-35B fighters and operate them aboard the new ship that has already been deployed and one to be additionally built.”

The ship in question is the Dokdo-class amphibious assault ship. The lead vessel was launched in 2005 and commissioned in 2007, and Seoul is currently in the process of building a second one. These are significantly smaller than Japan’s Izumo and the one Turkey is building. The Dokdos displace 14,000 tons when empty, but up to 18,000 tons when fully equipped. Media reports say the ships can carry up to fifteen helicopters and roughly 720 marines.

In some ways, Turkey’s ambitions are grander than either Japan or South Korea. Whereas those countries are only reportedly interested in light aircraft carriers, Turkey has been eyeing a full-fledged one. As Paul Iddon previously noted in The National Interest, Turkish president Recep Tayyip Erdogan announced his intention to build Turkey its own aircraft carrier in a in July 2017 speech. "We will build our own aircraft carriers," he said at the time.

The Hurriyet report about the F-35Bs reiterated Turkey’s interest in the aircraft carrier. “Over the next decade, Turkey also plans to build its first full-equipped aircraft carrier,” the report said. “Both aircraft carriers will be home to F35B aircrafts.” Ankara is also setting up military bases in Qatar and Somalia as part of its growing ambitions.