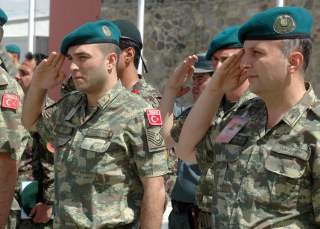 Two months ago, a medium-sized Yazidi village in Iraq called Sinjar was in desperate need of help. Surrounded and besieged by fighters from the Islamic State of Iraq and the Levant—a group that explicitly stated its intention to destroy those who practice the Yazidi faith—tens of thousands of men, women and children vacated their homes for a remote, dry and uninhabitable mountain range. Under siege with nowhere to go, thousands of men, women and children were forced to endure the hardship of living without food, water and shelter for days on end. Old men were starving to death, young children were dying of thirst and for the first time in a very long time, there was the possibility of an act of genocide occurring right under the world’s nose.

Thankfully for those Yazidis trapped on Sinjar Mountain, the United States took notice of their dire humanitarian plight. On August 7, in the State Dining Room at the White House, President Barack Obama stepped up to the podium and explained to the American people in a prime-time speech why the United States could not allow such a barbaric group of people to succeed in killing innocent civilians simply because of their faith. “When we face a situation like we do on that mountain—with innocent people facing the prospect of violence on a horrific scale, when we have a mandate to help—in this case, a request from the Iraqi government—and when we have the unique capabilities to help avert a massacre, then I believe the United States of America cannot turn a blind eye,” Obama said. “We can act, carefully and responsibly, to prevent a potential act of genocide. That’s what we’re doing on that mountain.”

The situation was eventually resolved: U.S. air strikes bombarded ISIL positions on the foot of the mountain, opening up a humanitarian corridor that allowed thousands of civilians to escape the horrendous conditions in which they were living. That act would come to represent the opening salvo of a broader and more comprehensive U.S. military campaign against the Islamic State group—as of August 8, over 400 air strikes have hit hundreds of ISIL targets, from artillery pieces and ISIL formations to armed vehicles and anti-aircraft weapons. A broad coalition of European partners has since joined the United States to conduct operations of its own.

If “degrading and ultimately destroying” the Islamic State within the borders of Iraq is hard, doing the same in Syria is harder. Unlike in Iraq, where U.S. airpower can be matched with forces on the ground like the Iraqi army and the Kurdish peshmerga, allies in Syria are in short supply. It will take an estimated twelve months for the training and equipping program established in Saudi Arabia to churn out the first batch of moderate Syrian fighters (which will number 5,000), and according to Pentagon Press Secretary Rear Admiral John Kirby, the vetting hasn’t even begun yet. Elements of the Free Syrian Army who are already on the ground wedged between Assad forces and ISIL are angry and bewildered as to why the United States is not coordinating the air campaign with them. The fact that the Syrian Kurdish city of Kobane is about to fall into the hands of ISIL, despite nearly eleven air strikes around the town in a 36-hour period serves as a perfect microcosm to the challenges and inherent flaws in Washington’s counterterrorism strategy in Syria: that is, without allies on the ground that can be trusted and are equipped with the weapons they need, air strikes will be limited to creating breathing space for fighters that are locked into their positions and unable to move.

Blaming America first is easy to do in this context. It is the United States, after all, that effectively drew up the campaign plan against ISIL, assembled the sixty-nation coalition and devoted far more combat aircraft, personnel and military resources to the fight than any other country. But that in and of itself is a significant problem, for it shows that despite claims from the Obama administration about the impressive breadth of the anti-ISIL coalition, its durability is severely tested by nations who are either unable or unwilling to do their share.

Turkey, a country that has the second biggest army in all of NATO, is perhaps the most critical player in the U.S.-led coalition. Yet, instead of President Tayyip Erdogan and Prime Minister Ahmet Davutoglu doing what they pledged to do publicly, both men are reticent of using Turkish troops and artillery to push ISIL back from their own border. It was Davutoglu himself who declared that Turkey “will do whatever we can so that Kobane does not fall,” and yet the reality is far different: Turkish tanks, standing by, watching ISIL creep even closer to the center of Kobane without doing anything about it. Turkish leaders, like Davutoglu, are also choosing to complain about what is not happening (like a no-fly zone inside Syria), rather than using Turkey’s considerable resources to improve what is. It’s a divergence between words and deeds that is beginning to upset Washington. As one anonymous U.S. official confided to The New York Times, “[t]his isn’t how a NATO ally acts while hell is unfolding a stone’s throw from their border.”

What once looked like an air campaign that was effectively diminishing the command-and-control and financial capability of the Islamic State in both Iraq and Syria, now looks like a campaign, two months in, that is impeded by a lack of ground troops in Syria and a set of supposed allies that are not buying into what the United States is trying to accomplish. Every military campaign has its troubles and pitfalls along the way—the question is whether the United States will convince its regional allies, like Turkey, to act on their pledges.