Turnbull in Washington: A Missed Opportunity 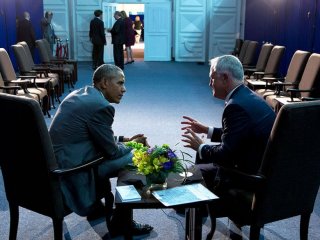 The trickiest part of Malcolm Turnbull’s speech in Washington today was always going to be the passage about China. This was the issue on which, to judge by what he said before becoming Prime Minister, Mr. Turnbull’s ideas are most at odds with Washington’s and with his predecessors.

He has argued in the past that China’s rise inevitably means big changes in Asia’s strategic order, which clearly implies a bigger role for China and a lesser role for the United States than we have been used to in recent decades. This is not something any Australian leader has been brave enough to say before, and it is not something anyone in Washington wants to hear. So perhaps we should not be surprised that he chose not to venture too directly into such territory on his very first visit to D.C. as Prime Minister.

Instead he quoted Thucydides, citing the famous line about war between Athens and Sparta being inevitable, and laying great emphasis on Xi Jinping’s statement in Seattle last year, when Xi denied there was a ‘Thucydides Trap’ and predicted a peaceful trajectory for U.S.-China relations.

All this attention on Thucydides owes a lot to Graham Allison, who in an influential essay in the Atlantic last September, argued that war had been avoided in four of sixteen historical cases of a rising power confronting an established power. Not all of his four exceptions to Thucydides’s rule are necessarily reassuring: he counts the U.S.-Soviet rivalry of the Cold War, for example, among them. But the basic point is fair: the Thucydides trap can be avoided.

However the really important part of Allison’s analysis comes at the end, where he explains what will be needed to avoid it. Here are his concluding paragraphs, which are worth quoting at length:

“At this point, the established script for discussion of policy challenges calls for a pivot to a new strategy (or at least slogan), with a short to-do list that promises peaceful and prosperous relations with China. Shoehorning this challenge into that template would demonstrate only one thing: a failure to understand the central point I’m trying to make. What strategists need most at the moment is not a new strategy, but a long pause for reflection. If the tectonic shift caused by China’s rise poses a challenge of genuinely Thucydidean proportions, declarations about ‘rebalancing,’ or revitalizing ‘engage and hedge,’ or presidential hopefuls’ calls for more ‘muscular’ or ‘robust’ variants of the same, amount to little more than aspirin treating cancer. Future historians will compare such assertions to the reveries of British, German, and Russian leaders as they sleepwalked into 1914.

“The rise of a 5,000-year-old civilization with 1.3 billion people is not a problem to be fixed. It is a condition—a chronic condition that will have to be managed over a generation. Success will require not just a new slogan, more frequent summits of presidents, and additional meetings of departmental working groups. Managing this relationship without war will demand sustained attention, week by week, at the highest level in both countries. It will entail a depth of mutual understanding not seen since the Henry Kissinger-Zhou Enlai conversations in the 1970s. Most significantly, it will mean more radical changes in attitudes and actions, by leaders and publics alike, than anyone has yet imagined.”

From everything Mr. Turnbull wrote and said about the issue before he became Prime Minister, one would have judged that he agrees with every word that Allison writes here. But that is very far from the impression one would get from what he said in Washington today. There he only spoke of what China has to do to avoid the Thucydides Trap:

“Now, if avoiding the Thucydides Trap is a core objective of China’s strategy—as President Xi insists it is—then we would hope that China’s actions would be carefully calculated to make conflict less likely, not more, and would seek to reassure neighbors of and build their confidence in China’s intentions.”

Of course this is half right: if escalating rivalry and conflict are to be avoided, then China will have to be willing to moderate its ambitions and calibrate its actions. This is a message that needs to be delivered loud and clear in Beijing. But it is only half the story, and it is not the half that needs to be heard in Washington.

Whatever we might wish, escalating rivalry in Asia will not be avoided if we wait for China to make all the concessions. America too is going to have to rethink its role in Asia and its relationship with China—these are “the radical changes in attitudes and actions” that Allison is urging.

This is a message that Washington still doesn’t get and badly needs to hear, and not just from scholars like Allison. It needs to hear it from leaders like Turnbull. He missed the opportunity this time. Maybe next time.

Hugh White is a professor of Strategic Studies at the Australian National University. This article first appeared in the Interpreter.