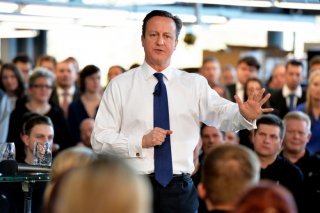 Thatcher’s Britain lives on—sort of.  The recent election was supposed to produce a hung parliament, with no single party able to command a majority in the House of Commons.  But despite months of opinion polls predicting the contrary, the Conservative party has managed to eke out a majority and should comfortably remain in control at Westminster for the next five years.  The result has shocked people in Britain but will probably serve to calm onlookers in the United States.

David Cameron thus becomes the first incumbent Prime Minister to gain seats when seeking re-election since Margaret Thatcher boosted the Conservative tally in 1983 in the wake of the Falklands War (and the first Conservative leader to a win a majority since 1992).  This is a remarkably impressive feat, especially given that Cameron’s first term—like Thatcher’s—was marked by significant social unrest and economic uncertainty.  At times, Cameron’s government—a coalition between his Conservatives and the third-party Liberal Democrats—was nothing short of abjectly unpopular.  Yet he has persisted, and he has triumphed.

In some ways, Cameron has succeeded by recreating the British electoral landscape of the 1980s.  His winning manifesto was replete with Thatcherite goodies: fiscal restraint, tax cuts, a robust defense of the Union (albeit this time including a vilification of Scottish separatists rather than Irish nationalists) and a significant—even if somewhat diluted—dose of Euroscepticism.  Like Thatcher, Cameron was helped by a supportive tabloid press and a relatively impotent Labour opposition seen by many as unelectable and economically incompetent.  This was a straight choice between sensible small government and reckless tax-and-spend socialism, Cameron averred.  The English plumped for the former.

More importantly—and dubiously—the election has revived some of the stark divisiveness of the Thatcher years.  In particular, this morning’s results have once again pitted Scotland against (the south of) England.  North of the border, the left-of-center, anti-austerity and rabidly anti-Tory Scottish National party (SNP) has won a stunning haul, claiming all but three of Scotland’s 59 parliamentary seats.  In the 1980s and 1990s, 18 consecutive years of Tory imposition on Scotland ultimately led to the creation of the Scottish Parliament in 1999.  How the newly emboldened SNP will respond to Tory rule from London remains to be seen, but it is certain that the indignant nationalists will not suffer a Conservative government gladly.  The gulf between Scotland and England looks set to widen.

In the end, then, the Conservatives’ eleventh-hour triumph means that the country has dodged the much-anticipated bullet of constitutional uncertainty over who should govern in the event of an indecisive election.  That is to be celebrated, not least of all in the United States (the SNP, which for a time looked likely to occupy the position of kingmaker if able to influence a Labour-led administration, is firmly anti-nuclear weapons and, up until 2012, was even pledged to Scotland’s withdrawal from NATO).

Yet this election was about much more than the short-term.  It was always pitched as a battle over Britain’s future.  And in that sense, Cameron’s victory serves as a powerful reminder about the state of British political development in the twenty-first century.  We are witnessing Thatcher’s Britain redux: a revival of conservativism as a national election-winning creed; the electoral success of small-statism; a triumph, perhaps, of individualism; but a country bitterly divided along regional lines.