Ukraine: New Online Resources from the Center for the National Interest 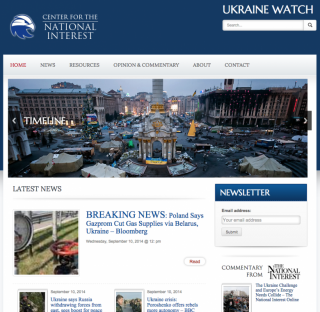 Washington, DC – The Center for the National Interest is pleased to announce the launch of Ukraine Watch, a clearinghouse for information, resources, analysis, commentary and reporting concerning the ongoing crisis in Ukraine.  Ukraine Watch is available at http://ukrainewatch.cftni.org.

As the situation in Ukraine continues to develop, Ukraine Watch will inform researchers, journalists and the public and present competing views, including official perspectives.  It will also include Ukraine-related commentary from the Center’s award-winning foreign policy website, The National Interest.  “Though the crisis in Ukraine could define core elements of American foreign policy for years to come, there has been little debate in the United States—and even less information.  We hope that Ukraine Watch will contribute to a rich, informed and intellectually rigorous discussion of U.S. policy based on facts and on U.S. national interests,” said Center Executive Director Paul J. Saunders.