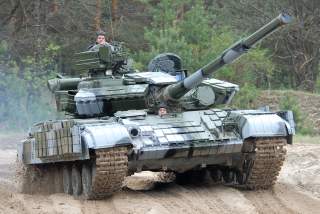 Since 2016, a slate of European militaries and the United States have gathered their tanks at Germany’s Grafenwoehr Training Area to put their armored beasts to the test in a variety of tactical exercises. This is the Strong Europe Tank Challenge, and a NATO-oriented — although not exclusive — competitor to Russia’s own famous tank biathlon.

Since 2016, Germany with its Leopard 2A6 tanks has placed first twice — in 2016 and in 2018. Austria and its Leopards placed first in 2017. Unfortunately for Ukraine, it placed last in eighth place during the most recent competition in June 2018. The competition’s results are here.

For a video of some of the action, see here.

Ukraine’s 14th Mechanized Brigade — a crack unit — competed using four T-84 Oplots, a Ukrainian-built spinoff of the Soviet-era T-80 tank, which was itself heavily inspired by the T-64.

Ukraine has exported these T-84 tanks to Thailand, but they have only served in limited numbers in Ukraine and have not entered the fray in Donbass where hundreds of T-64s may have been lost in fighting since 2014.

These T-84s encountered lot of problems at Grafenwoehr.

The T-84 uses an autoloader instead of a manual — human — loader, but on three of the four tanks, the shells did not load properly, according to Capt. Roman Bagaev, a company commander in the 14th Mechanized Brigade speaking to the Ukrainian military website Novynarnia. This is due to faulty charging mechanisms that send power to the autoloader.

Another issue — shakiness in the 125-millimeter cannon due to faulty fire-control systems. Beyond one kilometer, the tanks cannot accurately hit their targets. As a result, the group of T-84s only managed to fire 16 shells of the 40 shells the tanks brought with them.

All of these problems noted, the Ukrainian crews still like their T-84s compared to the T-64, which is by far the most numerous tank in Ukrainian service. There are more than 700 T-64s in service as of 2016 according to the International Institute of Strategic Studies, although this may not factor in combat losses.

Specifically, the T-84’s top speed of around 43 miles per hour outpaces the T-64 which ranges up to 37 miles per hour, and the T-80 is significantly faster in reverse. The Ukrainian tank commander said the T-64’s reverse speed is an achingly slow 2.5 miles — or four kilometers — per hour. Other sources state it may be nine miles per hour, but we’ll trust the commander.

Reverse speed is critically important for tanks given the tactic of “shoot and scoot,” or popping up and taking a shot before reversing. Typically, this means a tank hiding behind elevated terrain, such as a berm, exposing only its turret and minimizing the area an enemy can target. Once the tank fires, it then scoots backwards and out of an enemy’s sight. The T-84’s reverse speed is a massive improvement contributing to the survivability of the crew.

The ammo storage is also compartmentalized in a safer manner for the crew in the event of a hit which could spark an ammunition explosion. For a more detailed view of the T-84 and its continued improvements, see Charlie Gao’s overview.

What is particularly noteworthy — with all these problems — is that Ukraine still came close to beating the U.S. team with its M-1 Abrams tanks.

This first appeared in War Is Boring here.