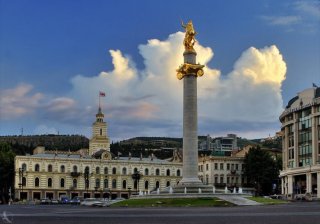 The ongoing conflict in Ukraine has kept reignited Western attention focused on the former Soviet republics, a varied group of countries often misunderstood by outsiders. Last week Georgia returned to the news due to perceived tumult within the government. On November 5, Prime Minister Irakli Garibashvili dismissed the Defense Minister, Irakli Alasania, following the latter’s comments regarding the arrest of employees of his ministry. Two other ministers then resigned in solidarity. Commentators were quick to emphasize Mr. Alasania’s pro-Western credentials, and to cast into doubt the commitment of the ruling Georgian Dream coalition to its Euro-Atlantic trajectory. A domestic political dispute was contrived to suggest that Georgian Dream is not Western in orientation and is using the judicial process to punish its political rivals.

These suggestions are unfounded. The recent dismissal and resignations are domestic political issues and have no connection to the course of foreign policy.  It is not surprising that this dispute allowed some opponents to accuse Georgian Dream of being secretly controlled by anti-Western forces, as this is a frequent albeit unfortunate feature of our politics. Political disagreements erupt for many reasons and are a natural part of democracy, and in parliamentary democracies like Georgia’s—as is true of most European countries—political movement at these times often seems excessive.  For Georgia, a more experienced democracy might have explained the events of last week more coherently, but even so the explanation would not have focused on judicial overreach or the judiciary’s meddling in politics.  Parliament and the government have in fact worked to improve judicial independence and to ensure the proper tools are in place to prevent the judicial process from being politicized, preventing the law enforcement system, specifically the Prosecutor’s Office, from becoming pulled into the epicenter of the political process, to introduce certain legal tools to protect the Prosecutor General and his/her deputies from having to take a position on political issues. The law enforcement system, including the Prosecutor’s Office, must be kept out of the political epicenter. This is one of the most important lessons we have learnt from recent events. We must consider this and improve our work.

Georgia’s ambitions to join NATO and the EU are as strong as ever. No political party would seek to change this course, not least because of the inevitable backlash from voters, who overwhelmingly favor integration with NATO and membership in the EU. Only this summer Georgians celebrated the ratification of an association agreement with the EU, and in September they welcomed the package for enhanced cooperation that was offered at the NATO summit. Overwhelmingly, Georgians support their country’s European and Euro-Atlantic integration. This is a firmly-grounded conviction, which is impossible to change or reverse overnight.

Despite Georgia’s commitment to its Euro-Atlantic trajectory, it also needs relations with Russia, its largest neighbor and an important trade partner. NATO and the EU support the improvement of Georgia’s relations with Russia, as does the American government. Vilifying the current government’s difficult work to improve certain aspects of that relationship is not only unhelpful for Georgia, but damaging to the stability of the wider region. Furthermore, as many commentators seem to have forgotten, there are strict and inescapable domestic limits on any Georgian government regarding rapprochement with Russia: relations cannot be normalized until Russia ceases to recognize the independence of the breakaway regions of Abkhazia and South Ossetia, and withdraws its forces from Georgian territory.

The current government has worked to lessen tensions, to reduce the danger of conflict, and to improve less-politicized areas such as trade and visas. Neither NATO nor the EU is prepared to bankroll Georgia or defend it militarily if another conflict erupts with Russia. This was made eminently clear in 2008 and more recently when conflict broke out in Ukraine. It is illogical to suggest that Georgia’s government is anti-Western simply because it understands this reality.

A Euro-Western trajectory has been pursued by Georgian policy makers for over twenty years; it was neither the discovery of former president Mikheil Saakashvili, nor is its continuation dependent upon individual politicians like Irakli Alasania. Many generations of Georgians since 1990s have contributed to Georgia’s Western trajectory, I need to admit that President Saakashvili and Irakli Alasania did their best in that regard. In spite of the exact balance of power in Parliament and the government, the country’s direction remains unchanged.  A stronger political opposition may emerge in our parliament as a result of last week’s events, but this is a positive development. An opposition willing to work constructively with the majority, and ready to hold it  accountable, will foster a political landscape in which parties compete for the mandate to build a strong, secure, democratic Georgia, able to stand independently as an ally and member of NATO, the EU, and the transatlantic partnership.

Tedo Japaridze is the former Georgian foreign minister and current chairman of the Foreign Affairs Committee of the Georgian parliament.