Understanding the Case for a Strike on North Korea: Brutality, Rationality and Deterrence 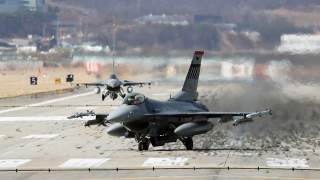 War with North Korea became more likely with the recent appointments of hawks John Bolton and Mike Pompeo as national security advisor and secretary of state. While the White House has confirmed that President Donald Trump and North Korean leader Kim Jong-un will meet for talks “by May,” the two nonetheless hold widely divergent preferences. Assuming neither side is willing to give up on its long-held baseline requirements, the talks will fail—and when they do, we can expect another uptick in inside-the-Beltway talk of military options. The idea of a “bloody nose” strategy got a lot of press in the run-up to the Olympics Games in February, but the logic of such a strike has received far less attention and merits examination.

Statements from administration figures and their allies in Congress about the North Korean regime and its likely behavior suggest a multistep rationale for a preventive strike. According to this case for war, (1) a leader’s or regime’s behavior determines whether or not they’re rational; (2) their rationality explains whether or not they’re deterrable; and (3) their deterrability dictates whether or not a strike against them is merited. From this perspective, because the regime in Pyongyang is brutal, it’s irrational and thus undeterrable, thereby necessitating a strike. But neither the first nor the second link in that causal chain is accurate, and the third requires some serious unpacking.

But when we move from public statements to the underlying logic of a “bloody nose” strike—the one military option that’s emerged from the Trump administration—a different line of thinking emerges. The U.S. goal vis-à-vis North Korea isn’t to maintain the status quo but to change it, and the perceived obstacle to achieving that goal isn’t the supposed brutality, irrationality and/or deterrability of the North but rather a credibility deficit on the U.S. side. Unfortunately, a “bloody nose” strike is highly unlikely to establish the credibility Washington needs without inviting a large-scale response from Pyongyang. We should therefore retire this poorly thought-out plan once and for all.

Members of the administration seem to believe that behavior reveals rationality (or a lack thereof). From this perspective, people or regimes who engage in brutal actions must be irrational. Nikki Haley, the United States’ ambassador to the United Nations, claimed last May that Kim Jong-un “is not a rational person, who has not had rational acts.” H. R. McMaster, President Trump’s outgoing national security advisor, unpacked this position a bit more, arguing last August that “classical deterrence theory” doesn’t apply to the North Korean regime since it “engages in unspeakable brutality against its own people” and “imprisons and murders anyone who seems to oppose” it.

Lawmakers allied with the administration echo these sentiments. In December, Sen. Lindsey Graham called North Korea “the ultimate outlier in world order,” describing Kim Jong-un as “on a good day, unstable. Look what they did: He’s killed his own half-brother, blew his uncle up with an anti-aircraft gun.” And last month Sen. James Risch, next in line to head the Senate Foreign Relations Committee if Republicans keep control of the chamber, suggested that North Korea’s “maliciousness” means the country’s leaders are “entirely different than the civilized people we’re dealing with who are nuclear powers.”

The North Korean regime, in turn, has provided the administration and its congressional allies plenty of fodder for such concerns. According to one count, since Kim came to power in 2011, he has had at least 340 people executed. And these killings have often been carried out in particularly gruesome ways. So for observers who use a leader’s temperament as a proxy for whether or not that leader is rational, it’s understandable that Kim would come off as irrational—and deeply so.

But these sorts of statements misunderstand the nature of both rationality and the North Korean regime. Rationality is determined by the mechanics of the decisionmaking process, not its outcome. That is, whether or not a leader’s decision or action should be deemed “rational” depends on how that leader arrived at that choice, not on what that choice ultimately was. A rational decisionmaking process involves setting objectives; weighing the costs, risks and benefits of the various ways of trying to advance those objectives; and choosing the option that appears to offer the best chance of doing so based on the information at hand. We tend, however, to confuse rationality and what might be called “reasonableness”—i.e., whether we like or agree with the actual choices others make. That’s a separate question, though; others’ choices may seem completely unreasonable to us and yet be perfectly rational nonetheless.

Put simply, just because most Americans find the policy decisions emanating from Pyongyang repugnant, that doesn’t make the regime irrational. Experts on North Korea seem unanimous in their assessment that the regime is in fact rational, and thus potentially responsive to incentives and disincentives. Even President Trump’s own outgoing CIA director and the agency’s senior officials have all conceded Kim’s fundamental rationality. Indeed, the administration’s own approach to the crisis to date—attempting to pressure the North into better behavior, whether through harsh rhetoric, economic sanctions or military exercises—assumes a calculating regime in Pyongyang weighing the pros and cons of different courses of action, and therefore subject to influence. And of course every day that the United States doesn’t attack the North would seem to be another day the administration has suggested a belief that the North can be convinced—has been convinced—not to attack us or our allies.

But President Trump’s public statements suggest that he views the North Korean leader as irrational and undeterrable. Speaking to the UN General Assembly, Trump said:

“The United States has great strength and patience, but if it is forced to defend itself or its allies, we will have no choice but to totally destroy North Korea. Rocket Man is on a suicide mission for himself and for his regime. The United States is ready, willing and able, but hopefully this will not be necessary. That’s what the United Nations is all about; that’s what the United Nations is for. Let’s see how they do.”

While the nickname Trump used for Kim Jong-un got most of the attention following this speech, the rest of that sentence is the more important portion from a deterrence perspective. Claiming that Kim “is on a suicide mission” implies he isn’t making decisions based on a weighing of the costs and benefits of various actions—i.e., it suggests that he’s irrational. Similarly, offering only the United States and the United Nations as ways to stop Kim reinforces the idea that the North Korean leader can’t be convinced to abort that mission—i.e., it suggests that he’s undeterrable. As John Delury recently summarized, “War becomes rational if Kim is not, since he might do something crazy, even suicidal, like start a thermonuclear war with the United States.”

Again, though, this perspective misunderstands both rationality and deterrence. A rational leader or regime will be deterred from taking some action if and only if they view the overall expected utility of taking the action as lower than that of not taking the action. Simply put, we can deter others from doing things we don’t want them to do only if we are able to make doing the unwanted thing look worse for them than not doing it. But there might be situations in which taking the action doesn’t look as bad from the actor’s perspective as sticking with the status quo, and therefore in which even a rational actor might decide to go ahead and do something the United States is trying to deter.

But the good news is the United States can deter—indeed, has deterred—North Korea from the worst the North might do. There’s a whole hierarchy of actions Washington would prefer Pyongyang not undertake: from launching a nuclear strike against the United States and/or U.S. allies down through starting a conventional conflict with South Korea or possibly Japan, selling or otherwise providing other states or even nonstate actors with nuclear know-how, further expanding its own nuclear arsenal, and continuing to test nuclear weapons and/or ballistic missiles. While the United States has not been able to deter North Korea from taking the actions towards the bottom of this list—and likely will continue to have trouble doing so—it has successfully deterred Pyongyang from taking the actions that would be most damaging to the United States or its interests. That, too, is unlikely to change. While we can’t deter even a rational North Korean regime from everything, we can deter it with respect to the most important things.

While we may spend a lot of time talking about deterrence, that particular means can’t actually achieve the United States’ desired end vis-à-vis North Korea. Deterrence means using threats to convince others to maintain the status quo. But the status quo in North Korea—an implacably hostile regime armed with nuclear weapons and, likely, the intercontinental ballistic missiles to deliver them against U.S. population centers—is one the United States finds intolerable.