An Underwater War May Be Brewing in the Asia-Pacific 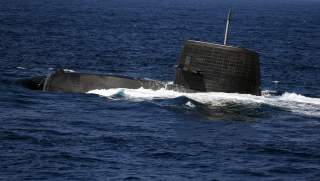 The 2016 Defence White Paper, the Naval Shipbuilding Plan, and associated statements by political figures such as Prime Minister Turnbull and Defence Industry Minister Pyne have all advocated the need for enhanced anti-submarine warfare (ASW) capabilities for the Royal Australian Navy (RAN). The impetus for this mooted rediscovery of ASW is the understanding that by 2030 over half the world’s submarines will be operating in the Asia–Pacific.

Recent posts on this site by Andrew Davies and James Mugg have also discussed the ‘art of ASW’. All have missed the fundamental issue that will severely affect the RAN’s ability to (in Andrew Davies’ words) ‘hunt down threat submarines for further treatment’: they’ll need to identify them first.

Based on current predictions, the Indo-Pacific of the near future will be teeming with submarines—American, Russian, Japanese, Korean (North and South), Chinese, Taiwanese, Vietnamese, Thai, Malaysian, Singaporean, Indonesian, Indian, Pakistani—not to mention our own. All of those submarines will be happily submerged and stealthily undertaking tasks in support of their own national strategic objectives.

Now consider that we are in conflict with one of those countries and are in the process of hunting down its submarines with the intent of destroying them. An Australian ASW asset gains sonar contact and prepares to engage. Then comes the really hard question: who are we engaging?

It can be expected that, in such a circumstance, the Australian government won’t want the ADF to indiscriminately take out the submarines of a non-adversary. That’s likely to evoke a hostile reaction from a neutral or friendly nation. Rules of engagement are therefore likely to mandate some form of identification before a torpedo is fired, but how can that be accomplished to reduce uncertainty to a manageable level?

One way might to implement a form of water space management. Managing water space involves sharing submarine location information, or at least a generalised location, with trusted partners to create submarine havens. A submarine in such an area is therefore assumed to be friendly and not to be engaged. But, while we may be willing to share some form of submarine-related information with some of the nations mentioned above, there are still going to be many uncertainties—and an adversary submarine that happens to be within a haven gets a free shot. Water space management will not be the answer.

Another option is to declare exclusion zones, so that a contact within such a zone is automatically determined as a legitimate target. Exclusion zones may be feasible in the immediate vicinity of a naval base or in a defined area around offshore assets (resource extraction facilities, for example), but less credible in the territorial waters of other states, or in high-traffic areas. Exclusion zones are, at best, only part of the answer.

In years past, passive sonar techniques provided the potential to identify submarines by the structure of their radiated noise. As Andrew Davies points out in his recent article, submarines are getting quieter, the oceans are getting noisier, and the potential application of passive sonar is diminishing. Besides, passive sonar is more applicable to the deep, open ocean where the time to analyse is less of a problem, rather than the shallower, congested waters that typify the contested parts of the Indo-Pacific.

That leaves active sonar. It’s possible to measure submarine characteristics such as length and breadth from the echoes received from active sonar transmissions, but the accuracy of those measurements depends on sonar frequency and the aspect of the target. Even in the event that accurate measurement is possible, how does an ADF unit in sonar contact distinguish, for example, between a Russian Kilo, a Chinese Kilo, an Indonesian Kilo, an Indian Kilo and a Vietnamese Kilo? Similar problems exist for some European submarines that have been acquired by multiple Indo-Pacific nations. As an aside, since we will be the unique operator of the world’s largest conventional submarine, the same problem doesn’t apply in reverse.

If we are to meet the future challenge that the 2016 Defence White Paper and other commentary envisages in the ASW space, this issue needs an urgent solution. Given the emphasis placed on developing our ASW capabilities, we need to concentrate on identification as a priority area of research. We also need to ensure that Australia has, and retains, sovereignty over the results of such research as that will have an impact on the ADF’s ability to undertake its necessary roles. Without a way to identify a submerged submarine, implementing the ADF’s much-vaunted improved ASW capability will be problematic.

Graeme Dunk is a commentator on defence industry and a former ASW officer in the RAN. He is a PhD candidate at the ANU Strategic and Defence Studies Centre on the subject of defence industrial sovereignty.

This article originally appeared on the Australian Strategic Policy Institute.