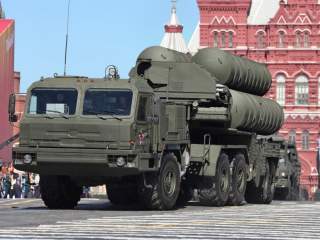 The U.S. Air Force is worried about Moscow’s deployment of advanced integrated air defenses in Kaliningrad, the Russian exclave between Poland and Lithuania.

Moscow started to deploy new the Almaz-Antey S-400 Triumf in the isolated Baltic Sea exclave as early as 2012, according to Russian media. While Europeans expressed qualms about the deployment early on, it was not until late 2015 that the U.S. military openly voiced its concern about the positioning of those advanced weapons systems. Weapons like the S-400, after all, are potent enough to render huge swaths of neighboring Poland and Lithuania into de facto no-fly zones for conventional non-stealthy aircraft if a conflict were to break out.

“It is very serious,” Gen. Frank Gorenc, commander of U.S. Air Forces in Europe told the New York Times this week. “Obviously, we continue to monitor it. They have every right to lay that stuff out. But the proliferation and the density of that kind of A2/AD [anti-access/area denial] environment is something that we’re going to have to take into account.”

According to Gorenc, Russian forces have deployed a layered integrated air and missile defense system in the Kaliningrad exclave of Russia. The weapons—which Gorenc didn’t specifically identify—are “layered in a way that makes access to that area difficult.” Gorenc is likely referring to Russia’s Voronezh-DM phased array VHF-band early warning radar, S-400 battalion, S-300s missiles and the other air defense systems that Moscow is thought to have positioned in the Oblast. With the S-400’s 250-mile range, Russian forces could engage aircraft flying over as much as a third of Polish airspace.

Russia has also deployed sizable ground forces in Kaliningrad, including three fully manned Russian combat brigades—one elite naval infantry brigade and two motor rifle brigades. Those mechanized infantry forces are backed up by an artillery brigade armed with as many as fifty-four big guns. Air power is provided by the 7054th Air Base—which hosts a variety of fighters, strike aircraft and helicopter gunships. The total complement is more than 10,000 troops.

Moscow might have also permanently deployed nuclear-capable 9K720 Iskander-M ballistic missiles with a roughly 310-mile range with the Kaliningrad-based 152th Missile Brigade. The weapons—which are highly accurate with a circular probability of less than fifteen feet—come in at just below the limits set by the Intermediate Nuclear Forces Treaty. However, some reports suggest the weapons have an actual range of 435 miles.

While the military forces in Kaliningrad might serve to intimidate Russia’s neighbors during peacetime, from Moscow’s perspective, the deployment is likely viewed as defensive. With the demise of the Soviet Union, Kaliningrad is isolated from the rest of Russia’s territory. The only direct access to the enclave is via the sea or a potentially vulnerable rail-link that crosses through Belarus and Lithuania. Thus during wartime, Kaliningrad would be extremely vulnerable to attack.

It’s likely, then, that Russia is effectively fortifying the exclave in the off chance of a NATO attack on Kaliningrad. In that case, the military forces deployed there would have to hold out until Russian forces from the ‘mainland’ can relive those troops—which would have to come through Belarus and then punch through Lithuania.

Paul Saunders, executive director of The Center for the National Interest—the foreign policy think-tank that publishes this magazine—said that Russia’s fortification of the Kaliningrad exclave was predictable following NATO’s eastward expansion.

“The Russians explicitly threatened to deploy Iskander ballistic missiles to Kaliningrad following NATO’s eastward expansion. At the time, that was dismissed as a lot of bluster,” Saunders said. “It turns out, of course, it wasn’t just a lot of bluster.”

In response to the Russian air defenses in Kaliningrad, the U.S. Air Force is working on developing tactics, techniques and procedures to deal with those systems in the near term. Longer term, the U.S. Air Force is likely to permanently deploy a substantial number of stealthy Lockheed Martin F-35 Joint Strike Fighter to the region. Indeed, the service has already started periodic deploy the stealthy Lockheed F-22 Raptor air dominance fighter to Europe to counter any future threat.