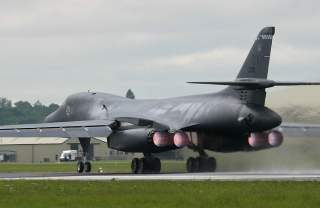 The U.S. Air Force released nearly 4,000 bombs on the Islamic State in March 2017, more in one month than at any time in the nearly three-year campaign.

Each month of 2017 has seen the number rise to higher levels than previously seen. The Air Force Times (AFT) notes a 62 percent increase in the number of munitions dropped in the first quarter of 2017, compared to 2016. Air Force officials stressed to AFT that the pace of operations aligns partially with the Iraqi Security Force’s grueling assault on the city of Mosul in Iraq, and support missions of U.S. backed forces advancing on ISIS’s capital of Raqqa in Syria.

The Air Force statistics only include strikes carried out by that military service, and do not include armed helicopter attacks under the purview of the U.S. Army. The Iraqi Security Forces require significant air support in their current campaign for Mosul. The Iraqi’s are advancing on the most densely populated area of the city, with very narrow streets.

The narrow streets render the Iraqi’s armored humvee’s useless in some areas, which serve as a major line of defense against snipers and suicide car bombs. This urban combat environment, coupled with the Trump administration’s increased pace of operations against ISIS, came under scrutiny after a U.S. airstrike may have played a role in collapsing a building on nearly 200 civilians in late March.

U.S. officials however believe that ISIS intentionally placed snipers on the roof of the building, and packed the basement with civilians to cause a PR disaster for the U.S. Military officials say they are in the process of declassifying video showing ISIS “smuggling civilians into buildings so we won’t see them, and trying to bait the coalition to attack.”