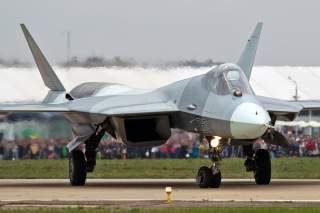 The Air Force is accelerating development of a special, high-tech, on-board threat library for the F-35 designed to precisely identify enemy aircraft operating in different high-risk areas around the globe - such as a Chinese J-20 stealth fighter or Russian T-50 PAK FA 5th Gen fighter.

Pleus said the service is working vigorously to speed up development and integration of new software engineered to widen the threat envelope of the mission data files to enable the now operational F-35 to better identify specific enemy threats.

While progress at the Eglin laboratory has been steady, the integration of the mission data files for the F-35 have experienced some delays, prompting the current effort to quicken the pace so that the operational aircraft has the most extensive threat library possible. The first increments of the technology will be integrated for training F-35s, Pleus explained.

"If there is nothing in the library, the F-35 will not know exactly what the threat will be," he said.

The idea with having an advanced threat library  is to enable F-35 pilots to see and destroy enemies in the air, well in advance of a potential dogfight scenario.