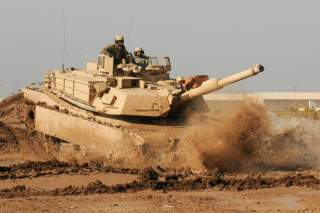 Ground combat is back and with its return an urgent need for the U.S. Army and Marine Corps to modernize its fleets of ground combat vehicles. We are talking about tanks, infantry fighting vehicles and their variants, self-propelled artillery and special armor protected vehicles for functions such as neutralizing improvised explosive devices and vehicle recovery. The idea that adversaries can be deterred or, if necessary, defeated through air and naval power alone has proven to be a chimera. In fact, recent conflicts demonstrate clearly the value of ground combat vehicles. Russia and its surrogates in the Ukraine have shown that much can be done with tanks, artillery and ground-based air defense systems and without great reliance on airpower.  According to the U.S. Army’s Combat Vehicle Modernization Strategy, “the Ukrainian battlefield is a harbinger of the complex environment the U.S. Army will face in the future; a battlefield that requires mobile protected firepower, the integration of all arms, and counters to long-range artillery, UAS [unmanned aerial systems], air defenses, and tank protection systems.”

There are other indicators that the Department of Defense will need to pay more attention to ground combat vehicles. Israel defeated Hamas in 2014 with a joint force that included a large number of Merkava tanks with active protection, heavy armored personnel carriers and other combat vehicles. Germany which reduced its Leopard 2 tank fleet from over 2,100 at the height of the Cold War to around 225 a few years ago is planning to buy back 100. A good start. The U.S. Army in Europe is bringing back to the Continent a full heavy brigade combat team. When it comes to deterring a high-end conventional adversary, it appears that there is no substitute for treads (and wheels) on the ground, so to speak.

Recognizing that ground combat is back, but lacking the resources to fully modernize its platforms, the U.S. Army and Marine Corps are pursuing a smart modernization strategy. They are attempting to address their most serious gaps with what little money is available. This strategy has several key elements.

First, extend the combat effectiveness of existing vehicles by selective, cost-effective upgrades including deploying advanced systems on current platforms and using commercially available systems where possible. A great example of this is the program to upgun the Stryker armored vehicles deployed to Europe with a new, unmanned 30mm turret. The Army is also looking to add an anti-armor missile capability, probably Javelin.

Another example is the introduction of active protection systems (APS) across the ground combat vehicle force. APS has proven its worth in Gaza and, according to some reports, in Eastern Europe. The Army is planning to test several commercially available systems on the Abrams, Bradley and Stryker. If successful, the Army is expected to acquire enough systems to equip several brigade combat teams.

Second, exploit capabilities resident in existing vehicles to support new functions.            The best current example of this is the use of a turretless version of the Bradley Infantry Fighting Vehicle as the core of the Armored Multi-purpose Vehicle intended to replace the obsolete M-113. The primary challenge to this relatively simple program is the danger of requirements creep.

Another Bradley-based example is the Paladin Integrated Management (PIM) program. PIM takes a new turret developed for one Paladin variant, marries it to an upgraded Bradley chassis created for another version and adds a new power pack, electrical systems and hydraulics.

Perhaps even more interesting is the current Army effort to deploy in the near-term a tactical directed energy weapon system. BAE Systems and Boeing are said to be in discussions to place the latter’s successful, low-power tactical laser on a Bradley.

Third, take advantage of non-developmental items to replace obsolete platforms. The poster child for this is the Marine Corps’ Amphibious Combat Vehicle (ACV). Recognizing the difficulties inherent in the requirement for a vehicle that can operate both as a speedboat and a land fighting vehicle, the Marine Corps decided to walk before it ran. Phase 1 of the ACV program will be a commercial-off-the-shelf eight wheeled armored vehicle that will rely on connectors to get it from ship-to-shore. BAE Systems and SAIC are the finalists for Phase 1. Phase 2 is intended to provide a vehicle that can self-deploy from ships, rapidly make the transition to the beach and begin to engage in combined arms operations on land.  This is expected to be a full and open competition.

Similarly, the Army is looking at acquiring existing commercial platforms, possibly modified, to provide light vehicles to infantry brigades. Recent testing of offerings by companies such as General Dynamics, Polaris Defense, Navistar and Lockheed Martin suggest that the desired capabilities could be rapidly developed and deployed.

The open question is, when will the Army and Marine Corps be ready to deploy the next generation of tanks and infantry fighting vehicles? Having suffered through the disappointments of the Future Combat Systems and past Ground Combat Vehicle programs and a lack of sufficient funds to meet many of its modernization requirements, the Army thought it could take a breather on pursuing new combat vehicles. Army combat vehicle strategy thought in terms of being able to wait until late in the next decade before having to begin the process of developing a truly new tank or infantry fighting vehicle. This may not be possible. Russia has deployed an advanced tank, the T-14 Armata, with an unmanned turret, advanced sensors, an active protection system and a gun system that can also fire guided missiles. The Russian Ministry of Defence is planning a whole family of advanced armored vehicles based on the Armata platform. Deteriorating relations with Moscow may force Washington and the U.S. Army to rethink the timeline for its combat vehicle modernization.