U.S. Marines Will Soon Be Lighter and Deadlier 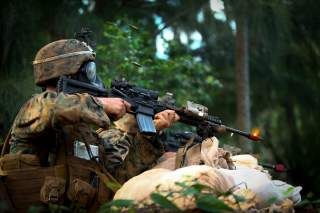 “Everything but the kitchen sink” might as well be the maxim of post-9/11 Marines who lugged half their body weight across Afghanistan and Iraq. Now, after years of bad backs, aching knees, and endless griping, the Marine Corps — in a joint effort with the Army — is racing to lighten the load.

The service is planning some changes to its body armor, ballistic plates, packs, and issuing lighter helmets across the Fleet Marine Force, according to Marine Corps Systems Command. Take a look at what’s in store for Marines:

The new armor, the Plate Carrier Generation III, is a lighter and less bulky version of its predecessor designed to “provide a smaller overall footprint than the current plate carrier while maintaining the same soft armor coverage and protection level,” according to a statement from Marine Corps Systems Command.

Though still in the prototype phase, the new plate carrier will reduce the length of the vest by 1.25 inches. The carrier also comes with new shoulder straps for improved fit, so Marines can say goodbye to the days of cutting their foam bed roll into jerry-rigged shoulder padding. Plus, it’s about 23% lighter than past models.

The new armor is designed to accommodate Marines of all shapes and sizes. The plate carrier will come in all the usual sizes, plus small short, X-small short, small long, and comes with a 6 x 6 inch side plate for those smaller-stature devil dogs, and should help outfit an additional 14,568 Marines with gear that actually, you know, fits.

The Corps is also looking at new ballistic plates to replace the standard Enhanced Small Arms Protective Insert and the Enhanced Side Ballistic Insert, which, though effective, are heavy and expensive. The initiative, called Ballistic Trade Space Project, will explore whether a lighter plate could successfully counter the majority of threats facing Marines downrange.

To ensure the current USMC Pack System stands up to the rigors and trials Marines face overseas, Marines deployed to Norway have been experimenting with reinforced frame prototypes. While the results aren’t in yet, the “reinforced frame has proven to have significantly higher durability over the legacy frame,” according to the Marine Corps.

Rounding out the latest round of gear improvements is the Enhanced Combat Helmet, which purportedly offers additional protection against small arms and frag. On June 9, the Marine Corps announced that Gentex Corporation in Simpson, Pennsylvania, was awarded with a five-year contract to produce and deliver enough of the lightweight helmets to outfit every Marine, both at home and and abroad, as Task & Purpose previously reported. The first order of 35,424 helmets is expected to hit the fleet for follow-on testing in September 2017; assuming all goes well, the I, II and III Marine Expeditionary Forces will receive the new headgear in Spring 2018.

From body armor to ballistic plates, packs, and helmets, the Corps is trimming down and likely saving knees and backs in the process, so long as nobody assumes that just because the loadout is 20 pounds lighter, Marines should carry that many more batteries and rounds.