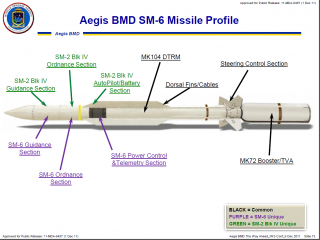 The upgrades are part of an intense service effort to better arm its fleet of destroyers and cruisers with modernized Aegis radar technologies engineered to both help the ships better attack adversaries and defend against enemy missiles.

Aegis radar, a technology now on destroyers and cruisers, is aimed at providing terminal phase ballistic missile defense and an ability to knock out or intercept attacking enemy cruise missiles.

Raytheon has been awarded a $20 million deal extension to perform these Aegis upgrades.

The Navy is both modernizing current Aegis technology on board existing ships and also building upgrades into ships now under construction. These new upgrades are designed to build upon the most current iteration of Aegis technology, called Baseline 9.

The next step in this continuum of modernization is equipping the next-generation DDG Flight III destroyers with the SPY-6 Air and Missile Defense Radar, Boxall added.

Compared to the legacy SPY-1 radar, Air and Missile Defense Radar will be able to see an airborne object half as big and twice as far - and testing is proceeding apace at Pacific Missile Range Facility, where we have radiated at full power and cycle, Boxall added.

Boxall added that all new construction DDG Flight IIA ships, beginning with DDG-113, will be delivered with Aegis Baseline 9C.

“NIFC-CA presents the ability to extend the range of your missile and extend the reach of your sensors by netting different sensors of different platforms -- both sea-based and air-based together into one fire control system,” a senior Navy official said.

So far, NIFC-CA has been integrated and successful in testing with both E2-D Hawkeye surveillance aircraft and F-35 Joint Strike Fighters.

There are at least Flight IIA DDG 51 Arleigh Burke-class destroyers currently under construction. DDG 113, DDG 114, DDG 117 and DDG 119 have been underway at a Huntington Ingalls Industries shipbuilding facility in Pascagoula, Mississippi and DDG 115, DDG 116 and DDG 118 are being built at a Bath Iron Works shipyard in Bath, Maine.

Existing destroyers, such as the USS John Finn and all follow-on destroyers, will receive the Aegis Baseline 9 upgrade, which includes NIFC-CA and other enabling technologies. Baseline 9 contains an upgraded computer system with common software components and processors, service officials said.

In addition, some future Arleigh Burke-class destroyers such as DDG 116 and follow-on ships will receive new electronic warfare technologies and a data multiplexing system which controls a ship’s engines and air compressors, Navy developers have said.

The NIFC-CA technology can, in concept, be used for both defensive and offensive operations, Navy officials have said.

Having this capability could impact Pentagon discussion about how potential adversaries could use long-range weapons to threaten the U.S. military and prevent its ships from operating in certain areas -- such as closer to the coastline.

Having NIFC-CA could enable surface ships, for example, to operate more successfully closer to the shore of potential enemy coastlines without being deterred by the threat of long-range missiles.

Defensive applications of NIFC-CA would involve detecting and knocking down an approaching enemy anti-ship missile, whereas offensive uses might include efforts to detect and strike high-value targets from farther distances than previous technologies could.

The possibility for offensive use parallels with the Navy’s emerging “distributed lethality” strategy, wherein surface ships are increasingly being outfitted with new or upgraded weapons.