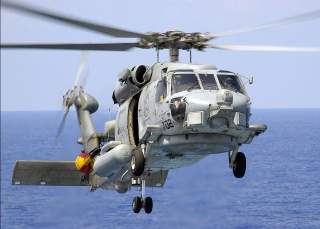 Called the Advanced Offboard Electronic Warfare (AOEW) system, the airborne sensor and links will extend the range over the horizon and offer some electronic attack potential, Ottaviano said Jan. 9 during a briefing in advance of the Surface Navy Association (SNA) annual conference.

The system can be used for more than just surveillance, he said, and provides the Navy with a first-look capability out on the seas. “You can sense and see long before the enemy knows you are there,” he said. But, he adds, he cannot provide any more detail about potential offensive EW measures the system can provide.

Currently, according to the Navy and the Pentagon, only Boeing EA-18G Growlers provide airborne electronic attack.

With a contract award in December, the program is on a fast track that the Navy wants to accelerate. “We have been challenged to go faster,” he said.

As part of the SEWIP’s Block 2, the AOEW helicopter pod will be linked with the ships’ SLQ-32 system.

The system is currently in full rate production for the U.S. Navy and International customers.

The AN/ALQ-210 ESM system autonomously scans the environment allowing for a high probability of detection and accurate identification, the company said. The system operation is tailorable through mission data loads which can be reloaded in flight to adapt to each specific geographic region.