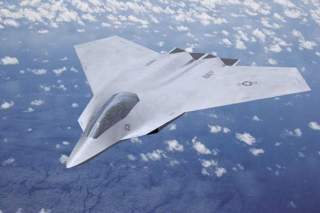 The U.S. Navy’s next generation air superiority fighter will not be “super-duper fast” or employ much in the way of stealth, a senior navy official announced on Wednesday.

Chief of Naval Operations Adm. Jonathan Greenert, the Navy’s top officer, divulged some details about the Navy’s so-called Next Generation Air Dominance F/A-XX fighter jet during a speech at an industry conference.

“I don’t see that it’s going to be super-duper fast, because you can’t outrun missiles.” Greenert said, the Washington Examiner reported. “And you can’t become so stealthy that you become invisible — you are going to generate a signature of some sort,” he also noted, adding “You know that stealth may be overrated…. If something moves fast through the air and disrupts molecules in the air and puts out heat – I don’t care how cool the engine can be – it’s going to be detectable.”

In lieu of stealth and speed, Greenert said that the F/A-XX would gain access by deploying “a spectrum of weapons” that could suppress enemy air defenses.

Greenert made the remarks while speaking at the Naval Future Force Science and Technology Expo in Washington, DC.

(Recommended: Will the F-35 Dominate the Skies?)

His concerns about speed and stealth appear to be valid. As USNI News notes, the proliferation of high-speed anti-air weapons to America’s potential adversaries greatly reduces the value of speed. Stealth also is a wasting asset, as Dave Majumdar recently explained on The National Interest:

“Russia and China are already working on new networked air defenses coupled with new radars operating in the UHF and VHF-bands that threaten to neutralize America’s massive investment in fifth-generation fighters. Fighter-sized stealth aircraft are only optimized to perform against high-frequency fire control band radars operating in the Ku, X, C and portions of the S-band.”

That the next generation fighter will gain access primarily by suppressing enemy air defenses also isn’t entirely surprising. After all, the Navy already employs the Boeing EA-18G Growler, an electronic warfare variant of the the F/A-18F Super Hornet, one of the planes that the F/A-XX will eventually replace.

(Recommended: How to Start A Proxy War With Russia)

Still, Greenert’s claims about the declining value of stealth and speed pose some stark questions for the armed forces and American taxpayers. The U.S. has spent decades and hundreds of billions of dollars developing and fielding the “super-duper fast” F-22 Raptor and the F-35 Joint Strike Fighter, both of which rely on stealth to be effective. These fifth generation aircraft are expected to be the foundation of the U.S. fighter fleet for years to come. If their capabilities quickly become inadequate to meet America’s security needs, the U.S. could find itself facing a glaring fighter gap.

It’s little wonder then that the military is already fast at work trying to develop the next generation X-plane even though the F-35 JSF is not even operational yet. Unfortunately, these sixth generation fighters might not operational until 2035.