US Navy's Cruise Missile Killer Fires 4,500 Rounds Per Minute (And It's Getting Upgraded) 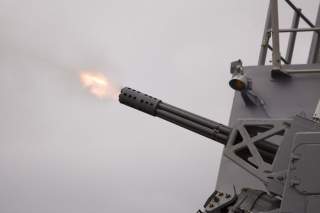 The U.S. Navy is pursuing a massive, fleet-wide upgrade of a shipboard defensive weapon designed to intercept and destroy approaching or nearby threats such as enemy small boats, cruise missiles and even low-flying drones and aircraft, service officials said.

The Phalanx Close in Weapons System, or CIWS, is an area weapon engineered to use a high rate of fire and ammunition to blanket a given area, destroying or knocking enemy fire out of the sky before it can reach a ship. The Phalanx CIWS, which can fire up to 4,500 rounds per minute, has been protecting ship platforms for decades.

The weapon is designed to counter incoming enemy attacks from missiles, small arms fire, drones, enemy aircraft and small boats, among other things. It functions as part of an integrated, layered defense system in order to intercept closest-in threats, service officials explained.

The weapon is currently on Navy cruisers, destroyers, aircraft carriers and amphibious assault ships, among other vessels. The upgrades are designed to substantially increase capability and ensure that the system remains viable in the face of a fast-changing and increasingly complex threat environment, Navy officials said.

The overhaul in recent years has consisted of numerous upgrades to the weapon itself, converting the existing systems into what's called the Phalanx 1B configuration. At the same time, the CIWS overhaul also includes the development and ongoing integration of a new, next-generation radar for the system called the CIWS Phalanx Block IB Baseline 2, Navy officials explained.

The Block 1B configuration provides defense against asymmetric threats such as small, fast surface craft, slow-flying fixed and rotary-winged aircraft, and unmanned aerial vehicles through the addition of an integrated Forward-Looking Infra-Red (FLIR) sensor.

The Navy has also embarked on a series of planned reliability improvements (known as Reliability-Maintainability-Availability Kits) in order to keep the CIWS fleet population viable and affordable for the next several decades, Eng said.

An upgrade and conversion of an older CIWS Phalanx configuration to Phalanx Block IB averages around $4.5 million per unit and a Block IB Baseline 2 radar upgrade kit averages $931,000 per unit, Navy officials said.

The Mk 244 ammunition is engineered with a 48 percent heavier tungsten penetrator and an aluminum nose piece, according to information from General Dynamics Ordnance and Tactical Systems.

The Baseline 2 radar also provides the Phalanx CIWS with "surface mode," meaning it adds the ability to track, detect and then destroy threats closer to the surface of the water compared with previous models of the weapon, developers explained.

The upgraded Phalanx CIWS is designed to give ships the ability to address surface threats which they have not seen before, service officials said.

In practice, this means the Phalanx equipped with Baseline 2 radar will have an increased ability to defend against fast-attack boats and low-flying missiles, projectiles and aircraft.

The upgrade to CIWS, Navy officials said, can be described as an element of the services’ “distributed lethality” strategy aimed at better arming the fleet with offensive and defensive weapons.

“In the case of CIWS, a ship defensive weapon, one could state that it supports the distributed lethality vision by providing self-defense capability to offensively lethal surface naval ships,” Eng said.