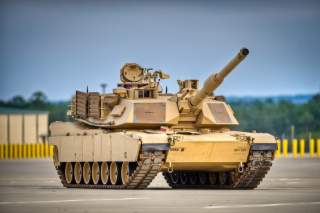 With some of the existing fleet of LCACs approaching 30-years of service, the Navy needs to begin replacing them with new ones, service officials said.

“We have two (SSCs) under construction to deliver in 2017 and two more that will begin construction in March of 2016. This is an upgrade to the current LCAC,” Owens said in an interview last year.

While the SSC design will be very similar to an LCAC, the new craft will incorporate a number of innovations and upgrades which will give in more speed, greater range, more payload capacity, improved digital controls and a new engine, Owens added.

“The new craft will have a greater load capacity so we can return to carrying M1A1 battle tanks aboard them,” he explained.

In addition, the SSCs will have a new Rolls Royce engine – the same one currently used in an MV-22 Osprey tilt-rotor aircraft, Owens said.

The new SSCs also increase the strength of the deck and improve the propellers when compared with existing LCACs, he said. The new SSCs can carry up to 74-tons across the ocean, enough to move an M1A1 Abrams tank with a mine plow, officials said.

The Navy’s 72 LCACs, in service for decades since the 80s, can transport up to 60-tons, reach speeds of 36-knots and travel ranges up to 200 nautical miles from amphibious vehicles, Navy officials explained.

LCACs can access over 70-percent of the shoreline across the world, something the new SSCs will be able to do as well, service officials said.

The Navy contracted with Textron Systems to build an in-house Navy design for the SSCs through an initial construction deal to deliver up to eight new craft by 2020. The contract has a potential value of $570 million.

Designed with over-the-horizon high-speed and maneuverability, LCACs are able to travel long distances and land on rocky terrain – even driving right up onto the shore.

In order to bridge the gap from existing LCACs to the new SSCs, the Navy implemented a special service life extension program for the LCACs – many of which are now approaching three decades of service.

The LCACs were re-engined with new engines, given new rotating machinery, new command and control systems, new skirts and fixes to corrosion issues. The effort is designed to put another 10 years of life back into the LCAC, Navy officials described.

The idea with the service life extension is to bridge the time-lapse or gap until the new SSCs are ready to enter the force in larger numbers, Owens explained.

Some of the enhancements being engineered into the SSCs are designed to address the changing threat landscape in a modern environment, a scenario that is expected to change how amphibious operations will be conducted in the future.

Since potential adversaries now have longer-range weapons, better sensors and targeting technologies and computers with faster processing speeds, amphibious forces approaching the shore may need to disperse in order to make it harder for enemy forces to target them.

This phenomenon, wherein potential adversaries have advanced weaponry designed to make it harder for U.S. forces to operate in certain areas such as closer to the shore, is described by Pentagon analysts as “anti-access/area-denial.”

“One way of dealing with an anti-access type threat is to have a distributed threat deployed it is able to quickly aggregate and then rapidly move from ship to shore,” Owens said.