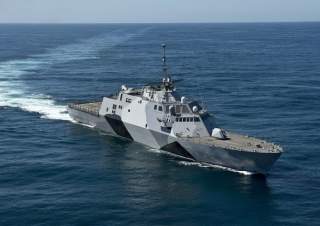 The Navy plans to have an operational ship-launched HELLFIRE missile on its Littoral Combat Ship by next year, giving the vessel an opportunity to better destroy approaching enemy attacks --such as swarms of attacking small boats -- at farther ranges than its existing deck-mounted guns are able to fire.

“Both the 30mm guns and the Longbow HELLFIRE are designed to go after that fast attack aircraft and high speed boats coming into attack LCS typically in a swarm raid type of configuration,” Capt. Casey Moton, LCS Mission Modules Program Manager, told Scout Warrior in an interview. said.

The 30mm guns will be fired against close-in threats and attacks – and the HELLFIRE is being engineered to strike targets farther away out toward the horizon. The concept is to increase ship Commander’s target engagement targets against fast-maneuvering surface targets such as remotely controlled boats and fast-attack craft carrying pedestal mounted guns, Moton explained.

“We are taking the Army's Longbow HELLFIRE Missile and we are adapting it for maritime use. We are using a vertical launcher off of an LCS,” Moton added.

Moton said the Navy has been conducting live-fire test attacks with a HELLFIRE missile launching from a deck-mounted launcher aboard a service research vessel. The ship-launched HELLFIRE is engineered a little differently than current HELLFIREs fired from drones and helicopters.

“With a helicopter, HELLFIRE often locks onto a target before launch (RF guidance). With LCS, the missile turns on its seeker after launch. We did 12 missile shots in the last year and had successful engagements with 10 of them,” Moton explained.

The LCS-fired HELLFIRE uses “millimeter wave” guidance or seeker technology, a targeting system described as “all-weather” capable because it can penetrate rain, clouds and other obscurants.

An upcoming focus for the weapon will be designing integration within the LCS’ computers and combat system.

“We did tests to push the boundary of the seeker so we could get data for seeker modifications. We tweak the seeker based on this data,” Moton explained

Part of the conceptual design for an LCS deck-mounted HELLFIRE is to enable coordination and targeting connectivity with Mk 60 Navy helicopters operating beyond-the-horizon.

“A helicopter can track an inbound raid as it comes in off of the horizon – allowing us to shoot the Longbow HELLFIRE missiles,” Moton said.

In these scenarios, the HELLFIRE would be used in tandem with 30mm and 57mm guns. Also, the Longbow Hellfire weapon is intended to be used in conjunction with helicopter-like, vertical take-off-and-landing drone launched from the LCS called the Fire Scout. This Intelligence, Surveillance and Reconnaissance, ISR, platform can help identify targets and relay real time video images back to a ship-based targeting and command and control center.

Previously, the Navy had considered a now-cancelled Army-Navy program called the Non-Line-of-Sight missile and a laser-guided Griffin missile for the LCS attack mission. With Griffin missiles, a laser-guided weapon, there is a limited number of missiles which can fire at one time in the air due to a need for laser designation. A Longbow HELLFIRE, however, is what is described as a “fire-and-forget” missile which can attack targets without needing laser designation.

The integration of a HELLFIRE missile aboard an LCS, which has been in development for several years, is considered to be a key element of the Navy’s emerging “distributed lethality” strategy implemented to better arm the surface fleet with improved offensive and defensive weapons.

Alongside the HELLFIRE, the Navy is also looking to integrate an over-the-horizon longer range weapon for the LCS and its more survivable variant, a Frigate; among the missile being considered are the Naval Strike Missile, Harpoon and an emerging high-tech weapon called the Long Range Anti-Ship Missile, or LRASM.

“The "Romeo" variant is an example of how these efforts result in a more capable missile that will maintain fire superiority for the foreseeable future,” Dan O’Boyle, spokesman for the Army's Program Executive Office Missiles and Space, told Scout Warrior.

Although the HELLFIRE began as an air-to-ground weapon, the missile has been fired in a variety of different respects in recent years. Also, the Army has fired the weapon at drone targets in the air from a truck-mounted Multi-Mission Launcher on the ground and international U.S. allies have fired the HELLFIRE mounted on a ground-stationed tripod.