US Navy's Railgun Dream Could Be Denied By Two Big Problems 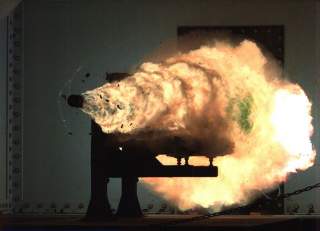 There’s renewed interest of late in the US Navy’s (USN)  electromagnetic railgun. Plans to perform at-sea weapon testing appear to have been delayed in favor of further research. So, while development will probably continue, there are still two major problems holding the railgun back. The first is meeting the weapon’s massive power requirements at sea. The second is demonstrating that it’ll be ‘better’ than existing weapons.

The railgun launches rounds using electromagnetic force rather than explosive propellant. The USN prototype has 100MJ of pulse-power capacitors and a 25MW powerplant for recharging. The capacitors release their stored charge into the railgun barrel in a hundredth of a second, accelerating the projectile to about Mach 6. The USN’s goal is to fire ten rounds per minute, so the capacitors need to be recharged to fire every 6 seconds.

Few warships have the spare electrical capacity the weapon requires. The strongest candidate is the USN’s Zumwalt-class destroyer, whose 78MW integrated power system can dynamically distribute power between propulsion and on-board systems. It should have about 58MW of reserve power while steaming at 20 knots. By comparison, the Arleigh Burke-class destroyer has only 7.5MW for on-board systems.

The USN previously had several nuclear-powered cruisers, but the last were decommissioned in the 1990s. A new class of nuclear-powered warships could host multiple railguns (or other power-hungry weapons). But before the USN commits the kind of money required, it has to prove that the weapon is worth the investment.

The LRLAP is almost ten times the cost of a railgun hypervelocity projectile (HVP), but doesn’t match the railgun’s expected range. The HVP can also be made compatible with both the AGS and the 5-inch guns on USN’s cruisers and destroyers. Table 1 shows the estimated outcomes of this effort, although it doesn’t take into account the terminal effect of the munitions.

The HVP is a 10kg kinetic energy round, which means that the damage it does depends on its impact speed. A Tomahawk land-attack cruise missile packs a 450kg high explosive warhead, has a range in excess of 1,500km and costs about US$1.1m apiece. The USN has plenty of Tomahawks and efforts are underway to make them anti-ship capable. As well, the USN’s new-generation anti-ship cruise missile (LRASM) is stealthier than a Tomahawk, has a ship-penetrating warhead, and still has a range in excess of 900km.

That’s bad news for the railgun, since its second envisaged role is as an anti-ship weapon. The railgun’s range is only useful in anti-surface warfare insofar as it can actually hit a moving target, and the HVP needs to hit with sufficient kinetic energy to do real damage. By comparison, a single LRASM is probably enough to at least mission kill most targets.

If hitting a moving ship wasn’t tricky enough, the USN is also hoping that the railgun will be able to defensively shoot down anti-ship missiles. The USN has surface-to-air missiles capable of intercepting both anti-ship cruise missiles (using SM-2 and SM-6) and ballistic missiles (SM-6 and SM-3). Closer in, the ESSM protects against missiles and aircraft within 50km, and the Phalanx Gatling gun is a close-range weapon of last resort (possibly augmented by lasers in the future).

Even if the railgun is capable of fulfilling this third role, it’ll probably be as a mid-tier weapon after SAMs. And a new project called the Hypervelocity Gun Weapon System[paywalled] is investigating the possibility that even 5-inch cannons will be able to shoot down missiles using the HVP. By the time the railgun is actually operational, it might be less of a game changer and more of an incremental upgrade.

Railgun technology could also be adapted to other purposes. For example, the electromagnetic launch system being installed in the next generation aircraft carrier operates on the same principle—it’s just bigger and slower. Perhaps an electromagnetic missile launcher could combine the launch speed of railguns with the range and accuracy of missiles.

The railgun’s prohibitive power requirements and stiff capability competition from missiles make it difficult to justify integrating it onto existing warships. If further development shows that it can perform better than existing naval weapons, USN will probably accelerate its operationalization. But based on currently available information, it’ll probably be quite a while before we see an operational navy railgun.

This first appeared in ASPI’s The Strategist, where you can find a link to the original article midway through the text, on the link directing the reader to a table.