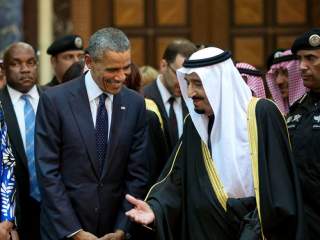 There has been a lot of parsing of yesterday's reputed snub of President Obama by King Salman of Saudi Arabia. It certainly was a snub. In 2009 the late King Abdullah greeted Obama off the plane during the U.S. president's first to the Kingdom; yesterday King Salman sent the governor of Riyadh to welcome the U.S. president while he received his Gulf counterparts a few hundred meters down the runway.

The reasons for the snub are pretty obvious too. Saudi impatience with Obama personally has grown exponentially. They blame him for an assortment of failings, real and imagined: abandoning the Mubarak regime in Egypt in 2011; failing to hold his red-line against Bashar al-Assad in 2012; and cozying up to the Iranians with a nuclear deal in 2015.

For Obama, sharp-eyed about U.S. interests and unsentimental about U.S. allies, the snub will have mattered very little. But if the Saudi leadership thinks, as it apparently does, that it can simply wait for Obama's successor to resume normal service then they are in for a nasty surprise.

The truth is that, with or without Obama, the fabric of interests that once tied the two countries together has been fraying for some time now. Certainly personalities do matter, especially in a country like Saudi Arabia, run more like a family business than a state. The Saudi royal family's close ties to the Bush family in the U.S., for example, certainly helped to hold some of threads of the relationship together.

But absent these personal ties, interests are brought into sharper focus. The United States needs less Saudi oil. It no longer bases much of its regional military forces in the country. And in recent years the answer to the question of whether Saudi Arabia is more of an asset or a liability in the fight against terrorism is much more finely poised.

Americans are asking more questions about Saudi Arabia's role in promoting extremism by exporting its intolerant brand of Islam. Congressional legislation that would allow 9/11 victims to sue the Saudi state in U.S. courts is just one manifestation of this.

Some of the questions that are raised about the Saudi state's support for extremism are unfair, but others aren't. Either way, for a country that is more comfortable wielding its influence in the United States through quiet lobbying, it is going to be a struggle to answer these more public charges.

None of this means that the U.S.-Saudi relationship is going to disintegrate. There are still strong and mutually beneficial military, intelligence and economic strands to the relationship. But to pull these back into a tighter weave will require some re-thinking of U.S.-Saudi ties.

It would be easy, for example, for a future U.S. president to reassure the Saudis by being more receptive to the Kingdom's external security fears and more overtly supportive of its regional military adventures and proxy wars. But this would do neither the United States, nor the region, nor frankly Saudi Arabia, any good.

It would be much better to return to the economic origins of the US-Saudi relationship.

In 1933 Saudi Arabia granted a historic oil concession to Standard Oil of California (SOCAL, later to become Chevron). The fact that the grant was to an American company, rather than one from the Middle East’s colonial powers, France and Great Britain, was highly significant at the time. According to one account, possibly apocryphal, Saudi officials told the SOCAL representative that despite his company's inexperience in the region, it's nationality had been a distinct advantage: “Your country...(has) no imperial designs. And besides, you are so far away.”

Things have certainly changed, but the company that emerged from this American economic venture in Saudi Arabia, Aramco, was central to the transformation of the Kingdom from a sleepy, impoverished exporter of dates to the world's most important energy producer.

Aramco's importance, however, was not just in the oil riches that it unearthed. It helped to diversify the Saudi economy by creating new industries. Saudis that trained at Aramco have gone on to be some of the Kingdom's most effective administrators and officials, not least the current Saudi Oil Minister who started his career as an Aramco trainee.

As I noted in a recent post, today the Saudi leadership's main challenge is not its battle for regional supremacy with the Iran, but the struggle to diversify its economy away from a dependence on oil income. Indeed, the race to reform their respective economies will be far more consequential for Riyadh and Tehran's battle for regional influence than anything that happens in Syria or Yemen. This is relevant to both the ability of Saudi Arabia to spread its largesse regionally as well as to its internal stability. According to one estimate, for example, unless the Saudis can create at least 4.5 million new jobs by 2030 the unemployment rate could creep to 20 percent.

But this also matters to the United States. Helping the Saudi leadership ensure that Saudi youth are gainfully employed and have a stronger base of technical skills will do more to undercut religious extremism in the Kingdom than any demands from Washington that Riyadh change the curriculum of its religious education.

Ironically, one of the ideas that the Saudi leadership has floated as a part of its economic reform effort is the partial privatization of Aramco. But there is a lot more the U.S. government, global institutions and the private sector could do to help the Saudis increase the role of the private sector in the national economy and reduce the pressure on state finances.

The trick to sustaining and reviving the U.S.-Saudi relationship will be weaving a new fabric of interests based on economic cooperation and reform. Given the Saudi leadership's antipathy to Obama this may need to wait for his successor. But it will also depend on the willingness of that successor to look beyond the recent past of U.S.-Saudi relations into its deeper economic origins.

Anthony Bubalo is the Research Director at the Lowy Institute for International Policy. He is also the Director of the West Asia Program covering the Middle East, Central and Southwest Asia. This article first appeared in the Interpreter.