USS Zumwalt, Baltimore and Freedom of the Seas 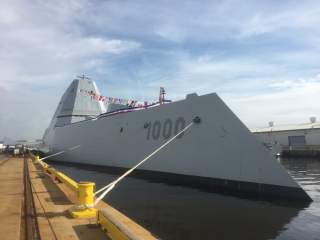 Last week’s celebration of Fleet Week in Baltimore, including the commissioning ceremony for the Navy’s newest and most technologically advanced destroyer USS Zumwalt (DDG 1000), provides a useful opportunity to consider the unique and outsized role that the Navy plays in this nation’s security and prosperity. No better example exists than the impact that maritime traffic through the Port of Baltimore has on the economic vitality of the State of Maryland.

Cargo handled in the port, whether the products of American mines, farms, or manufacturing plants headed outbound to global markets, or raw materials and consumer goods headed inbound from widely dispersed trading partners, moves across the world’s oceans freely and with confidence, confidence provided by the world’s most powerful Navy. This “beating heart of Maryland”—the Port of Baltimore—is responsible for $59 billion in economic activity and over 230,000 jobs directly and indirectly associated with that cargo. If we look at the nation’s 57 coastal seaports in the aggregate, the economic impact amounts to over 23 million jobs and over $4.6 trillion—a quarter of our nation’s gross domestic product (GDP)(according to studies by Martin Associates for the American Association of Port Authorities). This economic strength is the foundation of our military, diplomatic, and political influence in the world, and these attributes reinforce each other to sustain our position as the world’s dominant power.

The Port of Baltimore is a terminus in that global system of trade, and it is a system that works to the benefit of all Americans and all nations who choose to peacefully participate in it. Freedom of the seas is the irreducible minimum condition necessary for global trade, and it is the primary reason for our large, powerful, and globally employed Navy. No nation on earth has as widely flung commercial and diplomatic interests as the United States, and no nation on earth has the requirement to be able to transport its military power thousands of miles across the world and be ready to protect those interests when it arrives. Those distances and these requirements are why our Navy is both large and powerful, postured forward with combat power designed to impose its will at sea in order to influence events on land, from forces already located where our interests lie.

In addition to protecting the nation’s security and prosperity, the Navy built to impose its will at sea is equally useful in demonstrating the compassion of the American people when disaster strikes. The Navy and Marine Corps Task Force dispatched to the Caribbean last week in the wake of Hurricane Matthew was just the latest example of this most charitable impulse, an impulse that has been repeated across the globe in response to myriad disasters. Never far from the minds of potential aggressors is the plain fact that the ships dispatched to serve their fellow man in need were planned and procured for far more violent ends, and they can return to those pursuits rapidly should the requirement arise.

We have unfortunately, allowed our Navy to fail to keep up with the requirements we levy upon it, and the result is a Navy stretched thinly, ships and aircraft being worn out before their time, and Navy families separated for longer periods of time, more often. Today’s fleet of 272 ships (less than half the size of its Cold War predecessor) is too small for what we ask of it, and what we ask of it is dangerously misaligned with requirements of a Navy sufficient to deter China, Russia, North Korea, Iran, and to conduct operations against ISIS.

As a nation, we justifiably reaped a peace dividend when the Cold War ended, but the rigors of great power competition are again upon us whether we name them or not. Both Russia and China are making considerable improvements to their fleets, as well as to a series of land-based capabilities designed specifically to deny freedom of the seas in their near abroad. We must place a greater priority on growing our Navy even as we improve its capabilities. There are many who argue that today’s ships (such as the USS Zumwalt) and weapons are so sophisticated that surely we don’t need as many of them. This logic fails however, when we consider that our Fleet is not the only one that has added sophisticated ships, and that no matter how sophisticated a ship may be, it can still only be in one place at a time.

So, as we consider the celebrations of our Navy last week in Baltimore, let us keep in mind the immense responsibilities it has and the outsized contributions it makes to security and prosperity. And let us consider allocating an appropriate level of resources to enable it to carry out what we ask of it.