Video: I Went to 'War' Against America's F-22 Stealth Fighter (And Lost) 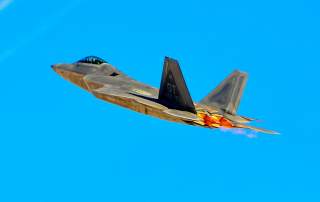 In this video, Vodka Flight—we were “replicating” the Russian-made Mikoyan MiG-29 Fulcrums in our trio of T-38A Talon advanced jet trainers—was shot down by a combination of Raptors and Typhoons. Basically, we had no idea we were even under attack until it was more or less over.

You can see my pilot Tsar maneuvering the aircraft around to avoid being “killed” before the inevitable end. In the end, it was a RAF Typhoon that got us. Basically, when you’re up against an F-22 or F-35, you die without even knowing you’re being shot at—as Vodka 1 and 2 found out during our flight. It’s what every fighter pilot who has flown against a fifth-generation jet says—but it’s hard to fully grasp until one fully experiences it in the cockpit.

Obviously, I’m not going to go into detail about how exactly the Air Force uses the T-38 to replicate a much more capable aircraft—that’s not something that needs to be public. The fact is that the T-38A has nowhere near the performance, the avionics or sensor capability of the MiG-29, but the Air Force takes advantage of Soviet/Russian air combat doctrine to overcome some of the platform limitations of the Talon to provide a very realistic threat presentation with the diminutive advanced jet trainer at beyond visual range distances. The T-38As do not fight within visual range with the Raptors—they will “knock it off” at the merge if it gets to that point.

As Wing Commander Chris Hoyle, commanding officer of the RAF’s 1(Fighter) Squadron told me: “The T-38—which has a much smaller radar cross-section—you have to look a little bit harder to target those groups and they’re very, very proficient at being red air targets for the community here at Langley. They’re very used to doing red air. They're wily, they’re experienced and they’re also very knowledgeable. So the combination of those two platforms gives us great training.”