This Video Shows Why Russia's 'Big Guns' Are So Lethal 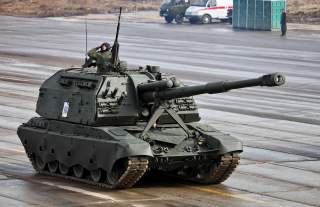 A recent video released by the Russian Ministry of Defense shows Msta-S howitzers firing precision-guided shells. While the technology is hardly new, it has been less common in the Russian army compared to standard shells used en masse — which still holds a pride of place in Russian doctrine.

The video, taken this winter, illustrates the dug-in, tracked howitzers striking several targets with the aid of forward observers on the ground and unmanned aerial vehicles with laser designators in the sky. The specific rounds in this case are 152-millimeter 2K25 Krasnopol rounds with seekers that guide themselves toward a designated target with maneuverable fins.

Russia already has combat experience with these guided weapons. In January, the Russian Defense Ministry claimed to have struck a Syrian rebel faction with guided Krasnopols after the militants attacked the Khmeimim air base with drones. The Krasnopol has a 12 mile range, but Russian troops or aircraft would have had to come much closer to designate a precision strike — which appeared to be the case from video of the strike.

Most of Russia’s artillery is unguided, which owes in part to the particular geography of Eastern Europe, where the bulk of the Russian army is concentrated. The terrain is relatively flat, making it difficult for forward observers to find elevated positions to snoop on the enemy. The solution is simple enough — use lots of massed, unguided artillery to destroy the enemy through cold probabilistic logic.

“There are occasions that call for the use of surgical, precision fires, but massed artillery fires carry a mathematical probability of kill with which it is easier to predict tactical success,” Lester Grau and Charles Bartles wrote in their 2017 book The Russian Way of War: Force Structure, Tactics, and the Modernization of the Russian Ground Forces.

Artillery-spotting drones and guided shells are not the only growing developments in the Russian army. A proliferation of communications and fire-control technology down to the battery level has allowed artillery units to conduct “split-battery operations” — a military term meaning a battery engaging more than one target simultaneously.