Want to Increase Your Property Values? Try a Nuclear War 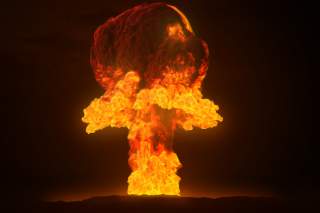 Ever wonder what nuclear Armageddon would do to real-estate prices?

How hard would it be to buy a tank of gas if Houston, Texas were suddenly struck by an atom bomb? Which fallout shelter is the most cost-effective?

All these questions and more were considered by Washington during the Cold War. Some tend to think of nuclear attacks as the end of humanity. But the truth is that a lot of people and infrastructure would survive.

This fact led to ghoulish studies of post-nuclear economics by federally-funded institutes tasked with envisioning life in the radioactive wasteland. In 1969, the Institute for Defense Analyses published a report titled The Effects of Nuclear Weapons on a Single City at the behest of the Office of Civil Defense. The report details the economic impact of a nuclear attack on Houston, Texas.

It provides a morbid cost-benefit analysis of everything from specific types of fallout shelters to the property value of surviving housing. After all, these properties would still need to be appraised, managed and used for habitation.

The report’s conclusions were also astounding—and disturbing. Survivors, the report’s author Samuel Eastman concluded, would become relatively wealthier than they were before.

According to the study, a single burst of a nuclear bomb between three and 10 megatons in explosive power would kill somewhere between 20 and 30 percent of the population within the affected area. Yet between 46 and 64 percent of the property values would survive.

This means the survivors scrambling from their shelters in the wake of the blast would have their pick of homes. “In a macabre sense,” the report states. “The surviving population would be individually ‘wealthier’ than before the attack.”

Yet the report notes, “joy among the surviving population may be quite short lived; none of these gross estimates of the effects of nuclear attack indicate whether or not the immediate metropolitan area is viable.”

The report also points out that this increase in property values only occurs when the property is prepared for the nuclear attack. A city that invests heavily in fancy fallout shelters, but does nothing to reinforce their existing infrastructure, will have little left when the dust settles.

Another caveat is how a nuclear war would change how Americans think about housing and property.

The United States is a materialist, consumer society based on building wealth through the possession of assets such as housing. We only need to look at the 2008 subprime mortgage crisis to see how much of America’s wealth sits in houses—and how catastrophic it can be to people’s lives to have this system disrupted.

Yes, housing would survive, but the structure of American life would irrevocably change. Nuclear war would not only change the types of dwellings people choose to reside—they may choose to avoid houses without basements—but also the location and how homes would be bought and sold.

In a 1979 report from the U.S. Congress’ Office of Technology Assessment, researchers sketched out various nuclear war scenarios and their effect on American society.

Given a limited Soviet nuclear attack on U.S. oil refineries and petroleum reserves, “the attack would leave the United States with about a third of its prewar refining capacity; this situation would persist until new refineries and ports could be built,” the report noted.

The cascading shock to the U.S. economy would shatter industries dependent on petroleum — that’s most of the industries in America. The steel and plastics industry, “much of the vacation industry,” agriculture and everything involving the transportation industries would go up in smoke.

This also has side-order effects on everything else, particularly the service industry. Most Americans use their cars to drive to and from work, to socialize, shop and eat. Now doing any of that is out of reach for the vast majority of people. The only reasonable alternative is to live in dense cities. As a result, urban real estate would undergo an economic boom.

“Demand in real estate would plummet in some areas, especially suburbs, and skyrocket in others, notably cities, as people moved nearer to work and stores,” the report concluded. “Such mass movement, even within cities but especially between them, would upset the demographics underlying taxes, schools, and city services.”

But given a full-scale Soviet attack on American cities, there would be a lot more to worry about than plummeting suburban real estate values. As the Institute for Defense Analyses pointed out, this kind of simple theory doesn’t factor whether the area is too radioactive to inhabit, or whether there would be any jobs available.

The survivors might still be relatively wealthier in a morbid sense, but they’d be sitting on the ashes of an industrialized economy—potentially now reverting to a medieval-style society. That’s not a trade-off anyone would want.