A War Like No Other: With the Peshmerga on the Front Lines Against ISIS 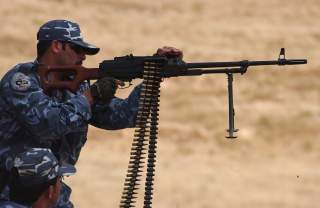 GWER, Iraq—First you notice the sound of jet engines. The sky is overcast, so you can’t see the coalition warplanes. But you can hear them. And you know what the snarl of jet noise and the occasional thud of an airstrike symbolizes for the Islamic State fighters about a mile away.

With a Kalashnikov slung over his shoulder and a curved dagger sheathed in his waist sash, peshmerga Col. Anwar Hassan watches his enemies through binoculars.

Hassan, 48, has been a Kurdish peshmerga soldier since the 1991 Kurdish uprising against Saddam Hussein’s regime, and he fought in the Iraqi Kurdish Civil War in the mid-1990s.

He also remembers the genocidal Al-Anfal campaign in the late 1980s when the Hussein regime killed about 180,000 Kurds through aerial bombardments, firing squads, and chemical warfare.

“Our only friends used to be the mountains,” Hassan says, amid the background din of jet noise and airstrikes. “Now we have America.”

Hassan commands more than 300 soldiers within peshmerga Unit 48. With about 1,000 total fighters, Unit 48 holds an 80-mile stretch of the front lines south of the Islamic State stronghold of Mosul in northern Iraq. The men under Hassan’s watch are spread along a 12-mile section of those lines, dug in on hilltops and in fortified compounds.

The peshmerga are a volunteer Kurdish fighting force, which represents an ancient warrior tradition dating back from before Alexander the Great. In Kurdish the word peshmerga roughly translates to “one who faces death.”

Today, the peshmerga are under the command of the Kurdistan Regional Government, an autonomous Kurdish region in northern Iraq. They are an ally of Operation Inherent Resolve, the U.S.-led international coalition combatting Islamic State, the terrorist army also known as ISIS.

As Operation Inherent Resolve approaches the two-year mark, the peshmerga have proven themselves in battle as the most reliable ground force against ISIS in Iraq.

With some of Saddam Hussein’s former Baath Party now serving within the Islamic State’s ranks, Hassan sees the fight against the terrorist army as one more battle in a war he has fought his entire life.

“Do you believe you’ll ever live in peace?” this correspondent asks.

It is the day after an Islamic State attack on a village north of Mosul, in which 31-year-old Navy SEAL Charles Keating IV died by sniper fire. Tensions are consequently high along the peshmerga lines surrounding Mosul.

Here, at a peshmerga position to the south of Mosul at a village called Gwer, the soldiers did not sleep at all the night before. They stayed up until sunrise ready to defend against a rumored Islamic State attack. More than 100 local Kurdish villagers took up arms to reinforce the peshmerga positions.

The terrain is wide-open, colored tan and green. Eroded hills ring the horizon southward. To the east are fields of wheat.

Islamic State positions are to the north and west in the direction of Mosul. No man’s land is a scrub-covered fluvial plain cut by the Great Zab River, a tributary of the Tigris.

The peshmerga are dug in on a ridgeline running parallel the river among a network of hilltop forts and cinder block homes converted into outposts.

On a ridgeline on the opposite side of the river about a mile away from the Kurdish lines, ISIS fighters scurry between their positions.

An ISIS pickup truck with a machine gun mounted in the back bed is parked under a lone tree atop a hill. Nearby, two ISIS fighters fire a machine gun from inside a cemetery. They use a stone grave as cover. But the shots are sporadic and haphazard, and none of the peshmerga soldiers fire back. They need to save ammunition.

A slit in the field about 80 meters (87 yards) from the Kurdish outpost marks the Islamic State’s closest point of advance. Bullet holes pockmark the walls of the compound facing the Islamic State lines.

Alongside Hassan, other peshmerga soldiers stand behind a sandbag reinforced wall on the roof of their compound. They pass binoculars back and forth, watching their enemy.

One peshmerga soldier turns up the volume on his radio when he hears ISIS fighters talking to one another. The Kurds don’t have encrypted communications; they share the airwaves with their enemy on off-the-shelf walkie-talkies.

There are about two dozen peshmerga soldiers at this position. Most are armed with Kalashnikovs only. They have a pair of U.S.-made M-16 assault rifles for the unit, which the Kurdish soldiers say they took from dead Islamic State fighters. In a room on the second floor of the outpost, a set of night-vision goggles sits on the floor beside a rocket-propelled grenade (RPG) launcher—the only one of each at this position.

In the compound’s courtyard there is a Toyota Hilux sport utility vehicle with a Soviet-made “Dushka” machine gun mounted in the back bed. The truck is parked so that the weapon is aimed over the compound’s wall in the direction of the ISIS lines. It is the Kurdish unit’s sole machine gun.

Unit 48’s commander puts a hand over his heart and explains that normally he would kill a goat to prepare a meal for an honored guest.

“Kurds are famous for our hospitality,” he says. “And I’m ashamed. But this is war.”

In a command post several miles behind the front lines, Zrar has agreed to an interview with The Daily Signal. Before talking about the war, however, he extols the qualities of the goatskin roll on which he sleeps.

“It is soft and keeps me warm at night; like a good woman,” he says, chuckling.

The peshmerga general wears a traditional Kurdish outfit with a thick waist sash over which is a belt laden with ammunition pouches and a holstered pistol. A checkered turban covers his head and he wears sunglasses, which he keeps on while sitting inside.

Like most Kurds, Zrar uses his hands a lot as he speaks. His facial expressions are animated and eclectic. To make an important point, he places a hand on your forearm.

A soldier brings in several glasses of sweetened tea and a plate of cookies. With the necessary formalities appropriately tended to, and a few minutes of pleasantries dutifully exchanged, the interview begins. Zrar promptly discloses his gratitude for American airstrikes.

“We stand shoulder to shoulder with America,” Zrar says. “We appreciate what the U.S. Air Force has done for us. America is our real friend.”

Overall, Unit 48 is responsible for an 80-mile-long stretch of the front lines around Mosul. The peshmerga have divided their front in northern Iraq into eight sectors, and Zrar’s is the longest.

Zrar is proud of his soldiers and says their morale remains high after two years of combat. Yet, he also insists the Kurds need more weapons and ammunition. The general blames shortfalls on Iraq’s central government in Baghdad, which he says has not followed through on handing over weapons the United States has pledged for the Kurds.

“U.S. weapons are supposed to come from Baghdad, but they’re not coming,” Zrar says. “All of our weapons are Russian, and we bought them on our own.”

Zrar says ISIS has an edge in firepower due to the quantity of Iraqi army equipment confiscated during their 2014 blitz across Iraq.

“Daesh has so many weapons, they have enough to fight for years,” Zrar says, using a disparaging Arabic acronym for Islamic State. “They fire as much in one month as we do in a year.”

The U.S. has pledged weapons and equipment for the Kurds, but all of the materiel is funneled through Iraq’s central government in Baghdad, which has proven reluctant to arm the Kurds.

“The Iraqi government has much better equipment than the peshmerga,” Zrarsays. “But the peshmerga are much more effective on the battlefield.”

Apart from the May 3 attack, fighting along the front lines outside Mosul has been largely static for months. Similar to the ongoing war in Ukraine, it’s a long-distance fight in which soldiers on opposite sides of no man’s land fire at each other from hardened positions and trenches.

Zrar pushed back against the narrative that the Islamic State is inept on the battlefield and exclusively relies on suicide bomber banzai charges. Some former Baathist commanders who served under Saddam Hussein have joined the Islamic State, the general explains. They add command experience, which has translated into coordinated, complex attacks.