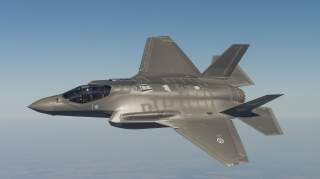 The Lockheed Martin F-35 Joint Strike Fighter is performing well at the U.S. Air Force’s Red Flag wargames at Nellis Air Force Base, Nevada. Though it was not designed as an air superiority fighter, the jets have maintained a very respectable 15 to one kill ratio according to the Air Force.

“Red Flag offers intensive training and is a tremendous learning experience,” said Lt. Col. Dave DeAngelis, commander of the 419th Operations Group, Detachment 1, who was among the F-35 pilots. “The aggressor pilots are among the best of the best and spend their days learning the tactics of enemy air forces, so it definitely puts us to the test.”

Started in the aftermath of the Vietnam War, the Red Flag exercises are designed to replicate combat scenarios that a new pilot might face during his or her first ten combat sorties during a real war, thereby increasing their survivability. During the three-week long exercise, friendly “Blue Air” forces face-off against “Red Air” in an air war that featuring air-to-air, air-to-ground, search and rescue, special operations forces and even cyber-warfare elements.

But while media attention often focuses on the air-to-air mission, the F-35 was primarily designed to be strike fighter. Thus far, in that role, the stealthy single-engine jet appears to be performing well. “Our stealthiness is proving very useful,” said Maj. Jayson Rickard, a reservist F-35A pilot, in an Air Force release. “We’re striking targets, killing advanced surface-to-air missiles, and getting some air-to-air kills.”

In its own description of the exercise, the air superiority oriented F-22 Raptor is primarily handling the air threat while the F-35 tackles the advanced air defense threats. “It is a step up and a look into the future for us,” said Royal Australian Air Force Group Captain Stuart Bellingham, Air Operations Center director at Red Flag in a U.S. Air Force release. “It’s really exciting to work alongside the F-35A and the F-22 to understand how we best integrate that into a high end fight in the training scenarios that Red Flag provides.”

The F-22 and F-35 were always designed to be complementary aircraft—the Raptor was designed to be the high-end air superiority fighter while the F-35 was supposed to provide the low-end of the mix. “They’re designed for air-to-air. We’re designed for the suppression of enemy air defense positions,” Lt. Col. George Watkins, commander of the 34th Fighter Squadron—which is flying F-35As during Red Flag—told the Las Vegas Journal-Review. “We can see the ground through the weather with our SAR [Synthetic Aperture Radar] mapping radar to detect a threat and take it out before it’s a factor to the other aircraft out there.”

Indeed, while a 15-to-one kill ratio at Red Flag might seem impressive, it must be noted that back in 2007 during a similar large-force exercise called Northern Edge where the Raptor made its debut, the Blue team amassed a 241-to-two record. More impressively, the two aircraft that were lost were F-15C Eagles—the F-22s went unscathed.