Warning: America's Air Force Is at a Historic Low Point 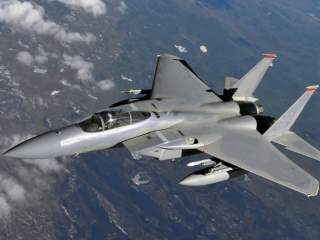 The United States Air Force is at one of its lowest points in history in terms of size, the age of its aircraft and readiness. Since the 1991 Gulf War the Air Force’s fleet has shrunk, its aircraft are increasingly decrepit and its pilots are not ready for a full-spectrum conflict against another great power. Nor is the Air Force large enough to meet its global responsibilities.

“Today we have just fifty-five total force fighter squadrons, and our total force is 30 percent smaller at 660,000, the average age of our aircraft is twenty-seven years and less than 50 percent of our combat air force is ready for full-spectrum operations,” Gen. David Goldfein, vice chief of staff of the U.S. Air Force told the Senate Armed Services Committee on March 15. “Couple the significant readiness decline with the rising and more aggressive China, recent Russian actions in Eastern Europe and Syria, continued Iranian malign influence, North Korea nuclear and space ambitions, and . . . ISIL, and you understand my concern with this dangerous trajectory.”

Goldfein said that the 2017 budget submission was the Air Force’s best effort to manage the competing demands placed on it with its limited resources. The budget attempts to balance between the demands of today and preparing for a future—even as Russia and China close what was once a huge technological gap, Goldfein said.

Since the start of the campaign in Afghanistan in 2001 and in Iraq shortly thereafter, modernization has suffered because conventional warfighting capability was sacrificed to maintain space, intelligence and nuclear forces. The end result is a force that has not procured enough modern conventional combat aircraft. “Air forces who don’t modernize eventually fail,” Goldfein cautioned. “And when the air force fails, the joint team fails.”