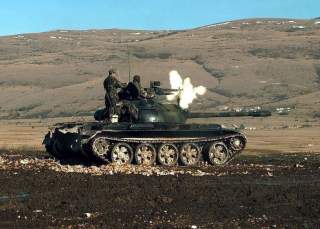 Despite the image of fraternal Communist brotherhood that Moscow sought to portray, it turns out that all was not harmonious within the Warsaw Pact. Those nations who hated each other before World War II and continued to hate each other afterward.

Case in point: a Polish Army report on East German troops conducting maneuvers on Polish territory during the Warsaw Pact "Oder Neisse '69" exercise in October 1969. The East German army behaved more like Hitler's army, according to the report, an excerpt which is included in the book A Cardboard Castle: An Inside History of the Warsaw Pact 1951-1991.

That the report was written by the Poles is obvious from the first paragraph of the excerpt, which  states that “the attitudes of the NVA GDR [East German National People's Army] were dominated by guilty feelings caused by the previous historical period.”

Unfortunately for the Poles, that guilt didn't last very long. The report goes on to note that during meetings between East German and Polish officers, the Germans boasted of their superior economic policies and higher standard of living, which they attributed to the “industriousness of the German nation.”

German officers “displayed excessive levels of self-confidence, particularly by overestimating their own and underestimating our organizational skills,” the Polish army noted.

For anyone who knows anything about how the German military in 1939–45 viewed Slavs and Eastern Europeans as lazy and dim-witted untermenschen, this definitely sounds familiar.

It gets better. The Poles complained that the East Germans enjoyed “throwing sweets to children and photographing these youngsters while they pick up the sweets, which caused unpleasant feedback and reminiscences among civilians.”

Keep in mind that in 1969, any Pole over age thirty-five would have memories of the German invasion and occupation, the hunger of the war years while Germany looted the nation, the executions and the forced labor.

After 1945, the Soviets redrew Poland's borders, with the Soviet Union annexing a swath of eastern Poland, and then compensating Poland with a swath of eastern Germany. This switch apparently didn't sit well with East German soldiers. “During official meetings, NVA GDR officers making presentations have never used phrases that address Poland's historic title to its western and northern lands. There is no doubt that this is a result of many years of subjecting NVA GDR  soldiers during political training to the theory that 'Hitler lost these territories.'”

One gets the sense from reading the Polish report that the East Germans wouldn't have recapturing that land.

Indeed, the Germans seemed to behave like they owned Poland.  In the city of Poznan, East German soldiers “under the influence of alcohol disgusted people walking on the streets of the city.”  Meanwhile, a “Col. Leisner, deputy commander of the 9th Armored Division of the NVA GDR, after binge drinking in the town of Charzykow, and missing his shoes and uniform, attempted to break into the room of Soviet typists, which required intervention.”

Not every incident ended so comically. The Polish Army report cites a case where an East German naval petty officer raped a Polish woman.

To be fair, strained relations between allies aren't new. “The Ugly American” has become a symbol of American insensitivity in foreign lands. British civilians complained American soldiers stationed in Britain during World War II were “overpaid, oversexed and over here.” South Vietnamese civilians resented crude behavior by U.S. servicemen and Okinawans still wish the U.S. bases on the island would go away. Soviet occupation troops didn't always endear themselves to the locals in Eastern Europe, while Afghan soldiers occasionally shoot their U.S. counterparts in the back.

Nonetheless, the fact is that in Polish eyes, the Germans of 1969 behaved like the goose-stepping stormtroopers of 1939. Which makes one wonder just how these two Warsaw Pact "allies" would have cooperated with each other, even under the watchful eyes of the Soviets. It's not hard to imagine an East German regiment failing to support its Polish comrades, or a Polish unit that accidentally lobbed a few shells on German positions.

Perhaps the Soviets wouldn't have minded that much. Better the Germans and Poles shoot at each other than shoot at the Russians.