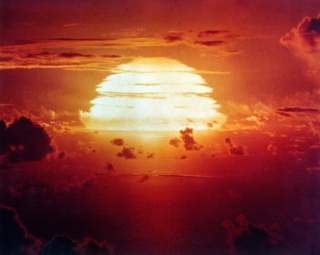 The Cold War is back, if you believe some public commentators at least. On one level, they are correct: current tensions between the United States and Russia over potential Russian territorial aggression in Europe, accusations of nuclear treaty violations, and whispers of a new nuclear arms race are certainly reminiscent of the Cold War of yesteryear.

But today’s strategic environment is in fact much different than 30 years ago, though some of the actors and issues remain the same. No longer is NATO worried about Soviet tanks pouring through the Fulda Gap into the heart of Europe; instead it now must plan for low intensity Russian aggression backed by a nuclear “first use” strategy. Gone are the days of debating whether a Soviet radar is allowable, replaced by concern that Russia is developing a prohibited nuclear cruise missile.

And yet, one anachronism from the Cold War still remains in the public discourse, claims of Washington’s actions causing a nuclear arms race between the United States and Russia. This begs the questions, what constitutes an arms race and is the United States really about to start one?

Today Russia is leading in the expansion of all levels of its nuclear arsenal while U.S. nuclear weapon modernization plans, proposed and defended by the Obama administration, will keep the United States under the limit of 1,550 deployed nuclear warheads allowed by the New START Treaty. Following steep reductions in the number of deployed U.S. nuclear weapons since the end of the Cold War, the United States has no plans to increase current numbers.

Yet some commentators who are stuck in a Cold War mindset claim that the Obama administration’s nuclear replacement programs are igniting a new nuclear arms race. President of Ploughshares Fund Joe Cirincione calls on President Obama to stop nuclear modernization plans or “his nuclear policy legacy may be the launch of a terrifying arms race that threatens destruction far beyond the horrors committed by ISIS.” Others, like Tom Collina and Will Saetren, hold that the United States is, “pursuing an excessive arsenal [that] runs the risk of igniting a new arms race with Russia that could needlessly undermine U.S. security.”

So are U.S. nuclear weapon programs to repair, replace, and modernize the nuclear triad of delivery systems (missiles, submarines, and bombers) and warheads really the opening salvo in an irrational game of nuclear one-upmanship? Recent history indicates otherwise.

In 1995, then-Secretary of Defense William Perry announced the findings of a Department of Defense review which determined that “nuclear weapons are playing a smaller role in U.S. security than at any other time in the nuclear age.” The Nuclear Posture Reviews of the Bush administration (2002) and the Obama administration (2010) also stressed the reduced reliance on nuclear weapons in U.S. defense planning and policy.

But Russian officials moved their nuclear doctrine in the other direction, actually increasing reliance on their nuclear weapons, despite official U.S. policy. In the late 1990s, the CIA assessed a shift in Russian nuclear doctrine that lowered the threshold of when nuclear weapons could be used in a conflict and allowed for Russian “first use” in order to “de-escalate” a conventional conflict. Today, these ideas are still central tenets of Russian nuclear strategy as seen by Russian military exercises, which often end in simulated nuclear strikes, and nuclear threats against NATO members. Senior U.S. defense officials even speak openly about Russia’s “escalate to deescalate” approach saying it “amounts to a reckless gamble for which the odds are incalculable and the outcome could prove catastrophic.”

Seeing no “arms race” in U.S. nuclear doctrine, what can we learn about the status of U.S and Russian nuclear weapon systems? There are five points to consider.

Third, U.S. nuclear modernization programs are explicitly designed and implemented in order to not start an arms race by staying under the limits of the New START Treaty of 1,550 deployed warheads, which the United States is. Unfortunately, the same cannot be said for Russia which has actually built up its nuclear warhead numbers from its starting point below the treaty limits in 2011, when New START took effect, to well above treaty limits today. Russia has until February 2018 to get back below the treaty limits in the number of its deployed warheads, and it may indeed comply, but the trend lines do not look good, and Russian cheating on other nuclear treaties should not give the United States confidence.

Fifth, while U.S. officials report that Russia is pushing ahead to make smaller and more effective nuclear warheads each year, official U.S. policy is to not design and build new nuclear warheads with new capabilities. Going even further, then-Secretary of Defense Robert Gates and then-Secretary of Energy Samuel Bodman wrote nearly eight years ago that “…at present the United States does not have the ability to produce new nuclear weapons.” (Emphasis original) In the same report, the authors noted “The United States has not designed a new nuclear warhead since the 1980s and has not built a new warhead since the early 1990s.”

Russia on the other hand reportedly has little compunction about designing and building new nuclear warheads with variable yields and special effects. U.S. officials have stated in this regard, “quite unlike the United States, Russia maintains a fully functional nuclear weapons design, development, test and manufacturing infrastructure capable of producing significant quantities of nuclear warheads per year.” One declassified CIA report examined Russian development of “subkiloton nuclear warheads” after the fall of the Soviet Union. Russian officials have even openly discussed developing precision-strike low-yield weapons, prospectively used as a “nuclear scalpel,” to deter Western military action. Clearly U.S. restraint in warhead design and development has not kept Russia from moving forward with its own warhead design programs.

To put all of this in perspective, U.S. Secretary of Defense Ash Carter recently responded to the idea that U.S. nuclear modernization programs are causing the Russians to act reflexively saying:

But the Russians are also very rapidly modernizing their own nuclear arsenal. I don't associate that with what we're doing. I associate it with the dynamics of their own feelings that nuclear weapons are one of the only things that guarantee their status in the world… but they're fueling their own nuclear modernization. It's a mistake to think that we're fueling it.
In fact, Secretary Carter is echoing Secretary of Defense Harold Brown in 1979 speaking about the Soviet nuclear program: “… when we build they build; when we cut they build.” It was true then and it is true now. So can it really be called a “nuclear arms race” if only one side is racing?

There may be an “action-reaction” dynamic in some aspects of international relations, but it is wrong to think that U.S. policies and programs are always the primary factors driving other nations’ nuclear policies.

Russia most-likely considers multiple factors when determining their nuclear force posture and size, including: fiscal constraints, future arms control commitments, perceived threat environment, adherence to international treaties, sensitivity to unknown future domestic and foreign developments, leadership desires, time constraints, regional and global goals, and adherence to grand strategy. While the U.S. nuclear force posture and policies may inform some of those considerations, it is clear that Russia makes its own calculations based on its own metrics, not just as a U.S.-induced knee-jerk reaction.

Instead of taking seriously the demonstrably false claims of a U.S.-instigated nuclear arms race, the United States should instead be focused on modernizing its nuclear forces to deter threats that are all too real, including Russia and China. As U.S. Assistant Secretary of Defense Robert Scher testified recently: “To be clear, our choice is not between keeping or modernizing the current forces. Rather, the choice is between modernizing those forces or watching a slow and unacceptable degradation in our ability to deter.” Analysts should let the newly rediscovered “arms race” rhetoric of the Cold War lie in the ash heap of history where it belongs.