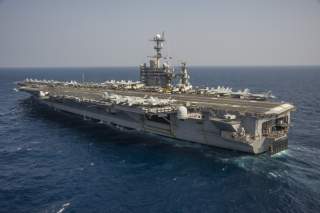 “The drill was conducted with main emphasis on rounding off the war method of mounting surprise air and naval attacks on the U.S. imperialists' carrier which sailed into the operation waters in the southern half to make military strikes at strategic targets of the DPRK,’ the report said, using North Korea’s official name, the Democratic People’s Republic of Korea (DPRK).

According to KCNA, the drills began with North Korea’s fighter aircraft “bolding breaking” through the carrier strike group’s “dense network of anti-air defense” to launch close-range “zooming attacks” on the carrier itself. After these sorties, “combined submarine units made torpedo attacks in succession from ambushed waters on the enemy forces hit hard by air strikes.”

After the drills were complete, Kim Jong-un directed the armed forces to intensify their efforts against U.S. carrier strike groups, because if the military “steadily studies and rounds off the war methods of mercilessly striking the enemy's backbone by the guerrillas-style combat method… it is quite possible to send even a carrier to the bottom of the sea.”

Kim also told the military not to fear America and its allies’ superior technology because “the fight with the enemies is not only the confrontation between arms and equipment and physical strength but the confrontation of mental power and ideology of people.” Kim argued that North Korea holds advantages over its adversaries in these latter qualities.

(Recommended: The 5 Most Dangerous Nuclear Threats No One Is Talking About)

It is not the first time that North Korea has discussed sinking a U.S. aircraft carrier. In October 2013, the U.S., South Korea and Japan held trilateral naval drills off the Korean Peninsula that included the USS George Washington nuclear aircraft carrier, along with supported weaponry like guided-missile ships, anti-submarine helicopters and early warning aircraft. In response, North Korea released a statement via KCNA that threatened to mount a counterattack that would “bury” the “provocateurs in the sea together with the carrier.” During the drills North Korea’s general staff said deploying the aircraft carrier for the drills was “very dangerous, reckless behavior,” and claimed it was armed “with at least 100 nuclear bombs aboard, many guided-missile destroyers, cruisers, submarines and escort warships, etc.”

Similarly, when the USS George Washington participated in drills in South Korea in July of last year, North Korea claimed charged the U.S. with “reckless hostility and confrontation," although it didn’t specifically threaten to sink the carrier itself. KIm Jong-un did visit frontline troops during the drill and directed them to send their enemies “to the bottom of the sea, to the last man.”

It is unclear if the North Korean military has previously practiced sinking U.S. aircraft carriers.