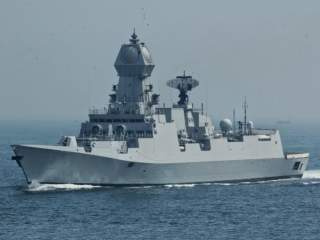 India will launch the lead vessel of its new class of super advanced, stealth destroyers on Saturday, according to numerous local media reports.

This week a number of Indian publications reported that the Indian Navy plans to launch the INS Visakhapatnam in Mumbai this weekend. The ship will be the first of four Visakhapatnam-class stealth destroyers that India is building as part of Project 15B. These vessels will serve as the follow-ons to the three Kolkata-class guided missile destroyers.

As India’s largest destroyer, INS Visakhapatnam and its sister ships will be a boon to India’s naval power projection capabilities.

“At 7,300 tonnes, Visakhapatnam will be the largest destroyer commissioned in the country and will be equipped with the Israeli Multi Function Surveillance Threat Alert Radar (MF-STAR) which will provide targeting information to 32 Barak 8 long-range surface to air missiles onboard the warship,” NDTV reported. India is co-developing the Barak 8 missile with Israel.

Visakhapatnam-class destroyers have a number of other advantages over their predecessors as well. For example, while both classes are equipped with the AK-630 close-in anti-missile gun system the newer class will have a 127 mm main gun. By contrast, the INS Kolkata and its sister ships only have a 76mm Super Rapid Gun Mount (SRGM).

Similarly, a senior Indian naval official explained to India’s Economic Times, unlike the Kolkata-class, the Visakhapatnam-class destroyers will have a full-fledged Total Atmosphere Control System (TAC). This will give it a greater ability to operate in WMD environments.

“The TAC system provides you with the capability of operating in a fall-out region, be it a nuclear, chemical or biological almost endlessly...because the complete air being taken inside is through nuclear, biological and chemical filters except in the machinery compartment," Rear Admiral A K Saxena, Director General (Naval Design) told the Economic Times.

Central to the Visakhapatnam is network-centric layout.mShe is equipped with a Ship Data Network (SDN), an Automatic Power Management System and a Combat Management System. Essentially, all information critical for the operation of the warship during all operations is available to key officers through the SDN which the Navy describes as a data information highway.

After being launched this Sunday, INS Visakhapatnam will undergo an extensive test and trial period before being delivered to the Indian Navy sometime in 2018. The other three Visakhapatnam-class destroyers will follow in two-year intervals.

Approximately $469.4 million is earmarked for Project 15B. Around 65 percent of the project is indigenous, according to numerous Indian media outlets.

Zachary Keck is Managing Editor of The National Interest. You can find him on Twitter: @ZacharyKeck.