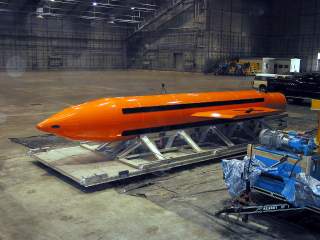 Caption from U.S. Military Release KABUL, Afghanistan (April 13, 2017) - A GBU-43/B Massive Ordnance Air Blast (MOAB) bomb strikes ISIS-K cave and tunnel systems in the Achin district of the Nangarhar Province in eastern Afghanistan at 7:32 p.m. local time Thursday. The strike was designed to minimize risk to Afghan and U.S. Forces conducting clearing operations in the area while maximizing the destruction of ISIS-K fighters and facilities and eliminate any perceived safe haven for ISIS-K in Afghanistan.

Editor's Note: See below TNI Defense Editor Dave Majumdar's pieces from yesterday on the MOAB below.