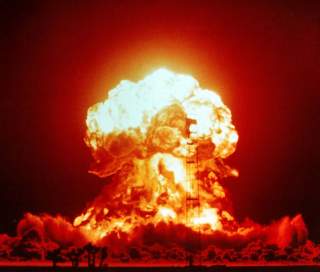 On December 22, 2016 Donald Trump tweeted “The United States must greatly strengthen and expand its nuclear capability until such time as the world comes to its senses regarding nukes.”  On January 15, 2017 he stated in an interview with British and German journalists “For one thing, I think nuclear weapons should be way down and reduced very substantially.” He floated the idea that Russia might join the U.S. in negotiating reductions to nuclear forces in exchange for sanction relief.  These contrasting statements appear to purposely shroud the negotiating hand of the President Trump when it comes to nuclear weapons.

But very soon the Trump Administration must adopt some policy objectives and begin taking actions to achieve them.  It is likely that Trump wants it both ways, to modernize aging U.S. nuclear forces and reduce their size, a reasonable goal consistent with the desires of all past U.S. administrations since the end of the Cold War.  Whichever way Trump trends on nuclear issues he will face formidable challenges.

With respect to strengthening and expanding U.S. nuclear forces the biggest obstacles are cost and the likely reactions of America’s nuclear rivals.  Current U.S. plans call for replacing or updating the full triad of nuclear weapons (bombers, submarines and missiles) at a cost of more that $1 trillion over the next 30 years.  This plan will strain defense budgets and reduce funding available for other national security imperatives such as naval shipbuilding, conventional force modernization, cybersecurity and counterterrorism.  It will also create incentives for Russia and China to strengthen and expand their own nuclear forces.  Negotiating reductions to the size of future U.S. nuclear forces could ease these fiscal pressures and add stability to major power nuclear competition, benefitting all sides.

Achieving this foreign policy outcome will be difficult.  The Obama administration tried for years to get Russia back to the table on nuclear arms following the 2010 New Start Treaty.  While the U.S. was open to greater cuts in strategic nuclear arms, it also wanted reductions to non-strategic or tactical nuclear forces of shorter ranges, a category of weapons in which Russia maintains a large numerical advantage over the U.S and its NATO allies.

Russia’s demands for such reductions have simply been to onerous, or politically impossible to meet.  For example, Moscow has claimed that other nuclear nations such as China (and perhaps Britain and France) must join the negotiations on nuclear arms, that U.S. missile defense plans must be scaled back and that advanced conventions weapons must also be part of the deal.  It also consistently declared that further reductions were impossible unless U.S. nuclear weapons were withdrawn from NATO bases in Germany, Belgium, the Netherlands, Italy and Turkey.  Such complex conditions excluded the chances of diplomatic progress with the Obama Administration.

Now President Trump wants to improve the strategic relationship with Russia and there is a chance that a simplified nuclear deal could be struck with a more flexible Russia that benefits all parties.  First, Russia must drop the condition that a new treaty directly covers the nuclear forces of third parties.  The United States and Russia maintain nuclear arsenals much larger than any other nation and between them possess more than 90% of all nuclear weapons in the world.  Bringing other states into the nuclear reduction process can await a final round of bilateral U.S.-Russian cuts.

In 2013, the U.S. Department of Defense concluded that the deterrence needs of America and its allies could be met with an arsenal of 1,100 strategic nuclear weapons or less, roughly a one-third reduction from the limits set by the New Start Treaty.  Such limits could be acceptable, even desirable for Russia, which faces its own fiscal constraints for nuclear modernization.  A deal could be struck along these lines, especially if both sides committed to improved relations and pledged not to undermine a lower strategic nuclear balance.

Second, the Trump Administration must convince NATO to put U.S. nuclear weapons in Europe on the negotiating table.  With terrorism on the rise in Turkey, Belgium, Germany and elsewhere in Europe the U.S. nuclear weapons stationed with NATO present far more risk than benefit to the alliance.  Moscow may be willing to make nuclear concessions of its own for their removal.  These should include a pledge to abide by the 1987 INF Treaty, verifiably cease its development of ground-launched nuclear cruise missiles, reduce its inventory of tactical nuclear weapons and pledge never to deploy them in Crimea or Kalinigrad.

Russian Foreign Minister Sergei Lavrov said on January 16 that a new dialogue on nuclear reductions could also cover future development of hypersonic weapons, U.S. missile defenses in Europe, space weapons and nuclear testing. Again, these are complex conditions and the devil is in the details, but some of these goals could also serve U.S. and NATO interests, especially the entry into force of the CTBT signed decades ago by both nations and already ratified by Russia.

With respect to limits on missile defense, these could only be achieved by a fundamental change in Russian foreign policy towards Europe and continued implementation of the JCPOA nuclear deal with Iran. Russia must cease its dangerous operational tempo of military overflights and exercises in the European theater generally and withdraw support for separatist movements in Georgia and Eastern Ukraine. Russia-NATO military relations must stabilize and improve and pledges never to alter European boundaries by force must be restated and honored.  Only then can removal of economic sanctions against Russia and limits on U.S./NATO missile defense be considered.

It may also be desirable for both sides to seek strict limits or an outright ban on nuclear armed–cruise missiles.  Russian Defense Minister Sergey Shoigu recently suggested that recent advances in non-nuclear cruise missiles such as those used against Syrian rebels might enable Russia to rely less on nuclear weapons in seeking a strategic balance with the U.S. and NATO.  This could create bargaining room in a new, comprehensive round of U.S.-Russian nuclear arms negotiations.

There is no fundamental reason that these issues cannot be addressed simultaneously within a new package or series of agreements on nuclear arms and strategic stability.  President Trump has promised to be the great dealmaker and build better relations with Putin’s Russia.  Let’s see what his team can do.

James E. Doyle is an independent nuclear security specialist. From 1997 to 2014, he was on the technical staff of the Nonproliferation Division at the Los Alamos National Laboratory.